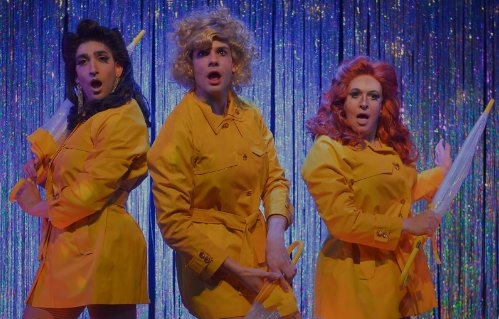 “Where’s the cheesecake?” asks director Troy Heard as he ransacks the small fridge on the set of “The Legend of Georgia McBride,” the last show of Majestic Repertory Theatre’s brilliant third season.

“It’s from that really good French bakery in Chinatown,” Randolph says, running through a light check for the show’s first full dress rehearsal.

Walking into the darkened theater on Main Street I thought I had stumbled onto the wrong side of the proscenium, that mystical wall that separates the world of the stage from everyday reality.

A rack of feathered and sequined costumes and a row of wigs on Styrofoam heads looked lifeless under the fl at working lights. Stage manger Corey Covell climbed up a ladder to hang a large, dusty mirror ball. It felt like I was backstage at Hamburger Mary’s before the Sunday drag brunch.

I flopped down on a black leather sofa and spoke with the play’s choreographer and assistant director Venus Cobb and other members of the theater company.

Cobb explains the experience of the play had already started because “The Legend of Georgia McBride,” is an “immersive experience.” I wasn’t just there to watch a play being performed; I was part of the performance.

Written by award-winning gay playwright, Matthew Lopez, “Georgia McBride” has been a hit on the regional theater circuit. The plot sounds like a mash-up of “Mrs. Doubtfi re” and “La Cage aux Folles” with “Come Back to the Five and Dime, Jimmy Dean, Jimmy Dean.”

Casey (played by Randy Hample) is a straight Elvis impersonator performing in a rundown bar in Panama City, Florida. When his wife, Jo (Destiny Faith) gets pregnant.

Casey decides to don drag to save his job when the bar’s beer-guzzling owner, Eddie (Scott Caster) changes up the entertainment to feature his cousin, Miss Tracy Mill’s (Michael Sullivan) tacky drag act. The drag show’s star performer is the recovery-challenged Anorexia Nervosa or Rexy (played by Kyle Jones).

Director Heard gets from his actors the kind of performances that make us identify with the characters’ struggles with gender identity and integrity. As Rexy says, “Drag ain’t a hobby, baby.” Heard named his theater company for Las Vegas’ fi st theater on Fremont Street. The current reincarnation of the Majestic is leading the extension of the downtown revival on a newly pedestrian-friendly Main Street that looks almost charming.

Heard’s passion for Las Vegas comes from his passion for community. He said the theater’s third season was his own response to the Oct. 1 shooting. He said the season’s plays, “Cabaret,” “Spring Awakening” and Majestic’s bilingual version of “Our Town,” have all asked the question: “How do you reaffirm community?”

Heard said that because of Las Vegas’ transience the city is searching for a sense of itself as a community.

He said that a theme of “The Legend of Georgia McBride” is that you build your own community, just like the straight boy, Casey, discovers his community in a bunch of drag queens.

“Georgia McBride” is at heart the old Hollywood story: The show must go on. It is perhaps not so much of a stretch for a sequinsuited Elvis impersonator to be transformed into a drag queen. But it is a bit more of a challenge for the straight Casey to come out of the drag closet to his pregnant wife.

Hample said that the show is an immersive experience for the actors as well as for the audience and that his performance changes depending upon how the audience responds to him.

He said that when Casey interacts with the bar’s patrons (us, the audience), that he relates to the women in the audience not just as a straight man would but as man in drag. The play challenges our conceptions of gender and gender conformity.

The play’s rundown bar is well-captured by Majestic Theater’s Design Ninjas team. It reminded me of my first apartment in San Francisco’s Haight District when I was 17 and living with a topless dancer — strangely hopeful amid the dreariness.

Award-winning designer RuBen Permel’s outrageous costumes must be seen to be disbelieved. They are displayed in their full garishness by Randolph’s sparkling lighting design.

Sullivan as Miss Tracy and Jones as Rexy give unsentimental performances as ladies who have seen good times and more bad times, but both are still here and they intend to stay — much like Las Vegas, itself.