I hope you noticed we didn’t have a December issue of the Spectrum. Thanks to the COVID-19 restrictions, there just wasn’t enough advertising to pay the printer, the postage, etc. We are back but we’ll be going bi-monthly until business is back to normal.

I want to thank Gov. Steve Sisolak. As many readers know, I’ve been unhappy with him since the last legislature when he torched some of our progressive agenda items, especially the minimum wage, which will eventually raise to $12 but by then, counting inflation, it’ll be a decrease from when the former minimum wages of $7.25 to $8.25 was enacted.

Here’s why I’m happy with the Governor. In going through some historical documents from Equal Rights Nevada, the organization which fought so hard from 1999 through 2002 against a state constitutional ban on same-sex marriage, I found some data I would like to share. While we lost in both 2000 and 2002, we finally prevailed in 2020.

From copies of checks, I found one of the larger donors to defeat the initial Question from 2000 and 2002, was Steve Sisolak. Now that I know, it gives me new respect for the man.

Other donors which I think should be noted for historical purposes, at the $1,000 (total) contribution level or above, include Dan Hart, Barbara Allen and her wife Kathy Gillespie, Dennis McBride, Mitchel Lightman, Mark Saylor, Rhonda Evans, HRC, Scott Wealls, the Las Vegas Bugle, Pete and Wendy Ernault, Odell Hubbard, Edward and Thelma Jones. Special recognition should go to Maya Miller and Carson Ann Miller, a couple who donated more than $15,000. Another couple, John Klai and Jon Sparer, donated more than $5,000.

While we’re doing the numbers, these are also significant. In 2000 and 2002, Question 2 banned same-sex marriage. In 2020, a different ballot measure, also known as Question 2, removed that constitutional ban and explicitly approved same-gender marriages.

Here are the results of those votes:

In 2002, 337,197 or 67.2% of Nevada voters again agreed to ban same-sex marriage, effectively putting discrimination into the Nevada Constitution.

Thankfully, in 2020, 821,050 or 62.4% of Nevada voters saw the errors of the past and chose to repeal that law. It was more to right a wrong and erase an ugly, discriminatory but unenforceable law from the state’s constitution. Same-gender marriage has been legal since 2014, thanks to rulings from the US Supreme Court. 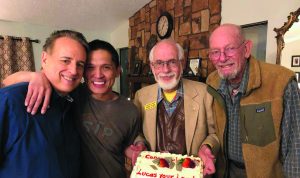 With that bit of history out of the way, here at the Spectrum, we need to acknowledge the death of our friend and business partner, Terry Wilsey.

We were shocked and dismayed to learn that while walking his dog at the Lone Mountain Regional Park, Terry tripped, fell, hit his head and never regained consciousness. Thankfully, he was with a friend who performed CPR and we know he wasn’t alone.

We have two articles about Terry in this magazine, but suffice it to say, he was a community icon. He was everywhere and attended everything. I counted on his friendship, leadership and called him for everything from advice, to historical data.

May our friend rest in peace.

As We See It: Economy? Stupid! It’s Russia