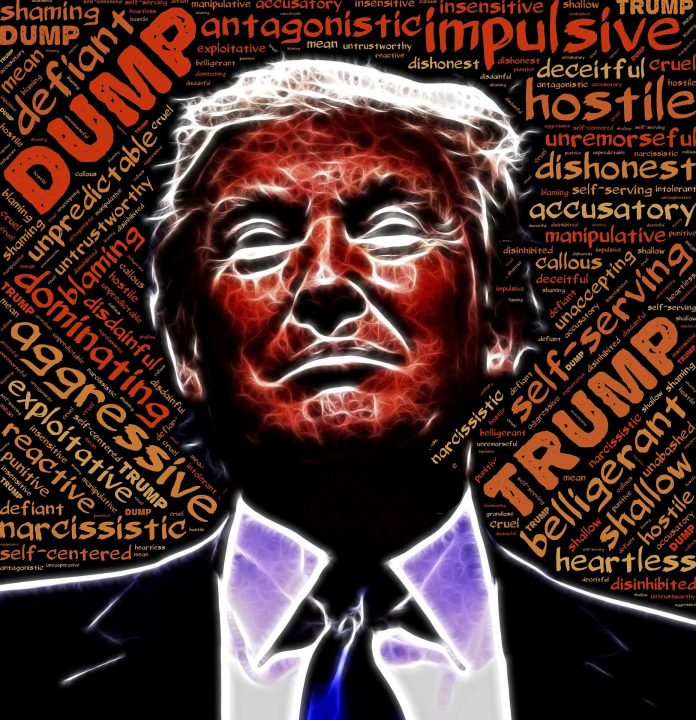 Can we just say it out loud? President Donald Trump has sold his soul and the presidency to the Russians. He needs to resign from office. In another era, he would be hung for treason. Lucky for Trump, we don’t buy into capital punishment. We would settle for him spending the rest of his life in prison.

The three primary standards of proof are: proof beyond a reasonable doubt, preponderance of the evidence and clear and convincing evidence. If Trump were impeached, he wouldn’t be removed from office because he controls the Senate.

What impeachment could do, is expose the evidence that could be used for a criminal indictment. An indictment, while in office, could toll the statute of limitations on his crimes. Once he’s out of office, he could be criminally prosecuted. At that point, it could be possible to find an impartial jury, where I believe he would be criminally convicted.

Meanwhile, let’s just say it. He’s guilty and we all know it. It’s just a waiting game.

We hope the next president will clean house in the justice department and we hope all the talent that has fled or been forced out of government, will come back to mentor the new leaders this country will need.

Is the water crisis real?

Here is part of a short editorial we wrote for our first edition. It wasn’t used due to space. As I’m writing this column on Sept. 22, I noticed an article in today’s Las Vegas Sun. It essentially says the same thing, but has numbers to back it up.

Drought on the Colorado and Lake Mead – If you want to know when we really have a water shortage, take a drive out to any of our lush, green country clubs. Many claim their golf courses are watered with “gray water” but even gray water is water not returned to the Colorado and therefore, water wasted. When we really have a water crisis, you’ll see those man-made lakes drained and the lush golf courses replaced with more water efficient landscape.

Las Vegas has reduced its per capita water consumption, but it’s still nearly double that of our friends in California. We have a long, long way to go.

That’s exactly what you didn’t see in our January 2019, first edition of the Spectrum.

The Sun reported the median annual water consumption for a Las Vegas household was 100,920 gallons in 2018. The top 100 home water users, consumed between 1.39 million and 12.4 million gallons each.

So yes, there is a water shortage in the valley, but I think it’s obvious where the cutbacks need to start.

Progressive of the year

Our friends at Battle Born Progress have an event on Oct. 22 (Mayor Pete Buttigieg, keynote speaker!), to celebrate progress in Nevada. Assembly Speaker Jason Frierson is named Progressive Leader of the Year. No doubt he is, but what would have happened if he had held out for a living minimum wage of $15? Would Gov. Steve Sisolak dared to veto it?

Battle Born Progress produced a great scorecard of the bills passed in the last legislature, but they neglected to mention several of those we lost, including cash bail, criminalization of traffic tickets, and the living wage of $15/hour.

We weren’t there and Speaker Frierson says $12 over four years was the best he could do. Let’s be optimistic they can do better in two years.

It’s been a tough 16 months for Frank Marino, since a local blogger erroneously reported he had been stealing from Make A Wish Foundation, a charity for kids with cancer. While the story was later corrected, it had been picked up by local media and blasted into nearly every Valley home. The correction, not so much.

Today, while Frank’s career has rebounded, he finds he’s often not introduced as a celebrity at local shows and was totally dissed by AFAN at its recent Black & White Party.

What may be a curious coincidence, has yet to be noted by local press. The Flamingo recently announced a new show, featuring RuPaul’s Drag race. It’s been in the works for nearly two years, which makes the end of Divas, at the Linq, seem a little too convenient. Would they really want two drag production shows, at Caesars-owned properties, next door to each other? We’re not making accusations, but like Cinderella, if the slipper fits, maybe it’s yours.

After talking to sources close to the story, here’s what we believe happened with Divas. The Linq Hotel, which housed the Frank Marino Diva’s Showroom, had an accounting problem with how many speciality drink cups were being used, versus reported sales. Caesars investigated and found Linq employees were ripping them off. As part of that investigation, they noted that one of Marino’s employee’s was upselling “cheap seats” into unused “comp seats.” If sold for cash, the money was being pocketed by the employee. The employee had work for Marino for about six months and during that time, the maximum amount he could have stolen, according to Marino’s financial records, $1,200 to $2,000.

Marino got none of that money. He just lost his showroom contract and all of his performers lost their jobs. We understand the charity, using figures supplied by Caesars, demanded several hundred thousand dollars from Marino, money they alleged he stole from them over a period of 10 or 12 years. In reality, the money had never been promised to the charity, other than by an employee who used the charity’s name for six months to upsale a few seats. Marino keeps meticulous records of how many comps he gave out for every show, for every year.

The most the charity could have lost was $2,000 but we understand, from a very qualified source, that Marino donated $100,000. Marino said the amount was confidential and won’t verify. He did say he was generous, hoping the bad publicity would just go away. Marino says he also paid the entertainment tax on those seats, which amounted to just under $200.

This is a scandal that just keeps on giving. It started with a part-time blogger, who got the facts wrong and reported Marino personally stole from the charity. It was repeated over and over again, in nearly every media outlet in town. Marino didn’t steal from the charity, but no one seems to get that part of the story.

A few months ago, when Marino’s name came up and a friend mentioned he had stolen from a children’s charity, I explained what really happened. The response was, “I don’t care. He’s still not a good guy because he never paid his performers enough.”

Whoa! Those performers were paid 33 percent more than any other current show in town pays their drag performers. Plus, unlike other drag shows, Diva performers were allowed to take other gigs to build their carrers. None of them were forced to work for Mario and nearly every one of them would jump to do it again.

We were happy to report last month that Marino is now emceeing “Legends in Concert” as Joan Rivers at the Tropicana. Then, he’ll be doing a road show in Florida and back to open his Divas show, on the Strip, next February.

Legends was set to perform in the recent AFAN Black & White Party at the Hard Rock Hotel. Legends asked that Marino be allowed to introduce the trio. Their request was turned down, with the excuse that the show was already fina.

Following the Legends’ Black & White performance, Marino, his husband Alex Schechter, the Legends producer and several performers, were going backstage to congratulate their performers. Marino was stopped by a security guard. The guard said all security personnel were sent photos, identifying Marino and were ordered to prevent him from going backstage. Frank asked if anyone else was barred. The guard apologized and said, “I’m sorry, only you.”

Marino explained, “I was blindsided, shocked and embarrassed. My friends were angry. I tried to smooth it over, not only to save face, but because we were there to raise funds for people living with HIV.”

AFAN’s executive director is Antioco Carrillo. Their marketing director and show producer is Andrew Ryan Pounders, a former employee of Marino, having performed in many of the Divas shows. Apparently, Pounders has a beef with Marino, which Pounders won’t explain, and Marino said he doesn’t understand.

The Spectrum called AFAN’s Carrillo the following Monday. He promised to get back to the Spectrum but has not. There has been no response from Carrillo, Pounders or the public relations agent for AFAN.

In discussing the incident later, Marino said he never bought the excuse Pounders made, preventing him from introducing the Legends act. He said Pounders had been mad at him several months ago, and claimed Pounders later blamed it on stress and relationship problems.

The Spectrum, via email, had asked AFAN to confirm Marino’s version of the events and had asked AFAN what could be done to resolve the issues, but again, no response.

Marino, when asked the same question: “I think Legends, SPI Entertainment, my husband and I, are all owed an apology. AFAN can claim heightened security, or some other excuse, but it makes absolutely no sense that I was the only person on their security, ‘do not admit,’ list. Let’s be honest, there was no reason I couldn’t have subbed for their drag emcee and introduced Legends in Concert.”

AFAN has gone silent. Since the organization won’t respond, we call on AFAN’s board of trustees to step in and issue and apology, one that should have been done immediately after the shenanigans happened. AFAN, Carrillo and Pounders: Shame on all of you.

Joe Biden and Kamala Harris will fight for LGBTQ+ equality