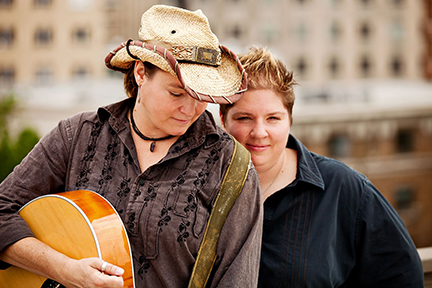 What do you get when you add a guitar, set of drums and two amazing voices? Stumped? Add a touch of country, a bit of rock n’ roll, a pinch of soul and a little blues for good measure. You just read the recipe for the captivating duio, Mama’s Black Sheep.

One-part Ashland Miller and one-part Laura Cerulli, these creative singing/songwriting ladies know how to take an audience on a musical journey that leaves you walking away scratching your head and saying: “All that came from just two women?” With a sound that often packs a punch just as strong as any four-person band, Miller and Cerulli weave a tapestry of emotions with their songs, which range from tear-jerking ballads to foot-stompin’ grab-your-girl-and-hit-the-dancefloor favorites.

The duo will perform at The Center for the Vegas Women’s Fest’s free official Women’s Pride Concert on Oct. 10 with special guest, Angela Bensmiller.

They spend most of their time on tour. The Las Vegas Spectrum caught up with them to talk about life on the road, their songwriting process and how two women thrive in a predominantly male mainstream music industry.

Cool name, how did you all come up with it?

A: We have both always considered ourselves the black sheep of our respective families, so we thought incorporating that in the name of the band would be fitting. There were already a few bands out there with “Black Sheep” in the name, so we decided adding “Mama’s” would add a feminine element, and also it sort of just sounded like a band to us.

How long have you been performing together?

A: 11 years this October

How did you meet?

A: We met at a festival many years ago. We were both in different groups at the time and played back to back on the same stage.

Can you describe your sound?

A: This is a hard question for most artists. We like to think our sound is the perfect blend of percussion, guitar and two strong voices. We draw influence from many styles, so we’re some combination of blues, country, pop and soul. Many people tell us they can’t believe it’s only two of us creating all of the sound they hear at a live show.

As two women in a predominantly male industry, what unique obstacles have you had to overcome?

Laura: I think as in any male-dominated industry, we as women have to just keep working at it — one venue, one fan, one heart at a time. There are so many venues and markets available, you just have to seek out and develop the ones where you can find your niche and build an audience. For me, personally, if I’m feeling resistance from someone showing gender bias, I usually do the best I can to remain professional, and just do what I do on and off the stage. Generally, once people hear/see us play, there is little question that we are just as capable of doing the job as our male counterparts.

Ashland: I’ve always approached my work as though gender bias does not exist. I do the very best I can with the talents that I’ve been given.

Do you feel that the industry is becoming more open to women since the Me Too Movement; more opportunities now then say five or 10 years ago?

Laura: I think this is two separate questions really. The “Me Too” movement has certainly created more awareness of the issues women face, and I think that can only help to further understanding and momentum toward more equality and better treatment for women in and out of the workplace.

In regard to opportunities available to women in the music industry, I think there are plenty of opportunities for anyone who is willing to invest the time and energy regardless of gender. The difficult truth that many aspiring artists don’t understand is that building a brand, building a network of regular venues and building a fan base is a very organic thing that takes time, money and persistence. While shows like “American Idol” and “The Voice” make it look easy to attain instant stardom overnight, it’s not really that simple. Yes, it’s true you can become a one-hit-wonder, or have an instant viral video, etc., but if you want a career in music, it takes a lot more work than what these shows reveal.

If you could change anything about the industry what would it be?

Ashland: It would be great if artists could truly be compensated for the amount of time and work they put in. It seems like the respect of art and artists is on a downward slant in this country. You can see it in the lack of support for music venues that really take care of the artists, and in declining budgets for the arts in our public schools. Fortunately, we are blessed with wonderful fans and supporters who are very good to us, but it’s an industry where you need to be very creative and flexible in order to be a full-time musician.

Who were some of your musical influences growing up?

Laura: I listened to a lot of classical music as a child, but I was influenced by many different vocalists and songwriters like George Michael, Tracy Chapman, Eva Cassidy, Tori Amos and Stevie Wonder to name a few.

Ashland: As a child I was influenced by Sting’s ability to write emotion into a song. I learned a lot from Karla Bonoff’s chord progressions and melodies. And Jeff Tate helped me realize you can write a story within the context of an album.

If you could perform with anyone, living or dead, who would it be and why?

Laura: I would have loved a chance to sing with George Michael. He was a huge influence, and his voice was just amazing.

Ashland: Prince, because his artistry bends my ear, and not too many many artists do. (And I want to kiss Wendy & Lisa and start the bath water for them!)

What’s your song-writing process, does one person write the music and the other the lyrics, or what?

Laura: We have done a couple of co-written songs, but for the most part we write music and lyrics on our own, individually, and then arrange songs together.

Ashland: I’ve often been asked through the years how does one write a song? My answer has always been that you think about the point you’re trying to describe and wrap your verses around that point.

How do you know something’s a keeper?

Laura: I just get a gut feeling when I know a song is going to be special.

Ashland: Intrinsically, I get a feeling about a song when I just can’t let it go and I know it needs to be out in the world.

Q: How many days out of the year are you both usually on the road?

A: We spend about 200 days out of the year together on the road.

How do you both like to spend your down time? Hobbies?

Laura: When we’re not traveling, I enjoy gardening, working on home improvement projects and scuba diving.

Ashland: I enjoy boating, Nascar racing and pretty much anything having to do with the water, after all, I’m a Pisces.

What do you enjoy most about being on tour?

Ashland: I enjoy sharing my gifts in an ever-changing atmosphere.

What do you hate about it?

Laura: The only thing that is difficult for me is that we have to miss time visiting with family and friends when it’s convenient for them, because our work week is most people’s weekend, and vice-versa.

As We See It: Sold-out Trump needs to resign; spend balance...