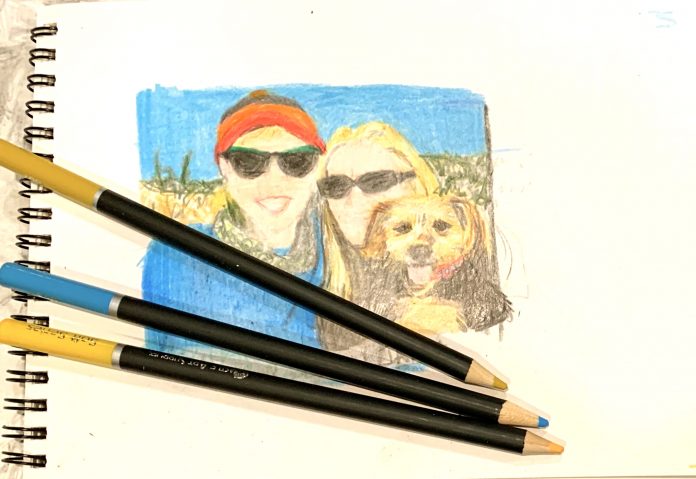 Dear Million Moms and your supporters:

I saw that you are boycotting the Hallmark Channel because it reinstated the commercial with two brides kissing at the altar.

We have so much in common that I couldn’t wait to respond. For one thing, I too, am a Hallmark viewer. It began with “Monk” marathons during an illness where I spent a year on the couch. It continued with “Murder She Wrote” then onto “Garage Sale Mysteries” and basically every other series or movie that came on. It just sort of became a thing.

We’ve never been fooled in our house about the content of the channel. We discuss the unreality of the Hallmark shows as we watch them. In fact, we discuss a lot of TV that we watch. So, to be honest, I’ve never made it past the shock of everyone being white on Hallmark shows to even get around to the gay thing.

I mean there are entire towns, plots, scenarios and communities without black, Asian or Latino families. It’s as if Hallmark decided to pretend that nonwhite people don’t actually exist, or that if they do, they’re merely peripherals. I’ve noticed that slowly changing on the channel, but it’s weird that there is far more diversity on my one suburban block than Hallmark’s own shows.

But still I watched all these very simple formulaic, and completely unrealistic, stories that I enjoyed. I didn’t flinch when I learned that you were upset that the Hallmark Channel would be running a commercial in which two brides at the altar exchange a kiss after devoting their lives to one another. I knew the scripture you’d use.

I’m no stranger to scripture, prayer, and salvation. I grew up in the church. My family grew up in the church. We were at church several times a week in one form or another. My parents were Sunday school teachers. They sang in the choir. My brothers and I sang in all of the choirs. We were all baptized, attended Sunday school and church services and Bible studies. We were confirmed. My family read from daily devotional books, at times together, at the dinner table. My parents listened to Christian music radio. The town I grew up in looked back then so much like the towns in Hallmark shows that you and I watch.

“Filth,” I believe is the word you use on your website to describe me and representation of others like me on television.

I think of my father when you say “filth” to describe me and people like me in the name of Christ. My dad is a Christian man, probably looks and sounds like your dad, attends church regularly, cries during services. He loves me. His wife loves me. They love my girlfriend. As I write this, we’re already prepping for our Christmas together. Even my Christian mother and devout FOX News viewer is grateful for my girlfriend in my life. She tells me nearly every time we talk.

The first I learned that not all Christians interpreted scripture and Christ the same was as a child when I learned that Southern slave owners used the Bible to justify their treatment of human beings. At the time, we were learning about the Holocaust and singing children’s songs about the racial equality in Jesus’ eyes and this really, truly shocked me.

It threw my understanding of Christianity into upheaval that only continued through childhood. More recently, a Christian woman I know commented negatively on women from Mexico coming over the border to have their children in American hospitals that offered safer and better care. I was blown away, not just because of this woman’s inhumanity, but because it literally went against everything I learned in church and scripture. She follows scripture.

Back to your issue at hand. Marriage is about family, about going through life together, struggling together, celebrating together, mixing and growing families. Those of us who have been in long-term relationships understand the marital kiss over time.

Marriage, at least to me (and to so many throughout my life), is about so much more than just sex. But if it is your belief that marriage is only about wild, non-stop, carnal desire, then that’s your thing. Don’t assign that to my marriage. We have so much more depth than that.

You state in your petition that it was gay outrage that led to the reinstatement of the commercial on the Hallmark Channel. What makes you think that only gay people are offended at your efforts to remove of us from civilization, or at least hide us?

Your argument that gay marriage and gay acceptance is a threat to families and the institution of marriage is honestly, bizarre.

Let’s look at what’s really devastated American families in recent years (aside from institutional racism): the mortgage crisis. Families have lost their homes and have been displaced because of lending in our country. Now, they’re dealing with health care issues. Meanwhile, corporate welfare is making kings in our country, putting all of the money in the pockets of a very small percentage of people.

I could ask: “Have any of you moms or your husbands worked for financial lending institutions?” But I’m guessing that you know where I’m going with that. And you’re gearing for your response. I’ve seen how the church addresses usury. It has to respond, given what many argue what the Bible says about lending with interest, whether to your brother or to the poor or whomever. Many see that throughout the Bible it is brought up over and over and over as a grievous sin. So what about that boycott?

And, in the name of Jesus Christ, where is your outrage for the filth that the vulgar president of our country spews daily. The things he says on television, at Boy Scout rallies, political events and in tweets would have gotten me a slap in my face at my house and would have required some heavy lifting from the church. Are you really more bothered that your child might ask why two women are kissing than them asking why the president of the country brags about grabbing women by the pussy? I would so much rather explain love to my young child than horrific sexual assault on a woman.

I’m guessing you were outraged by the way Bill Clinton’s affair brought sexual terminology to primetime television. So many were, especially parents. What I don’t understand is the lack of outrage to today’s president who mocks and attacks others daily.

My concern would be that my child would hear the awful, awful, awful things he says in arenas filled with people cheering him on. He attacks adults for their disabilities and he attacked a child with Asperger’s. And did you see the comment on U.S. Rep. Debbie Dingell (D-Mich.)? He is everything my church taught me to not be.

In October, leading televangelist Pat Robertson responded to Trump’s abandonment of the Kurds by saying this: “I believe … the president of the United States is in danger of losing the mandate of heaven if he permits this to happen.” Trump-supporting Christians were discussing this, and, even finding ways to debate Robertson.

Where do you find the time to bash us?

Additionally, it seems there is concern that your children will see homosexuality as normal and turn your child gay. I can tell you that throughout my long and varied life I have watched men and women kiss each other. I’ve seen men and women kiss on television. I’ve seen them kiss in public, kiss in the family home, in the neighborhood, at family gatherings. I’ve seen straight people kissing everywhere throughout my life. It’s even been told to me that it’s “right,” but it has never, ever, ever turned me straight.

2020 VISION: What will the new year bring? Las Vegas community...

Elizabeth Warren would be an LGBTQ+ ally in the White House