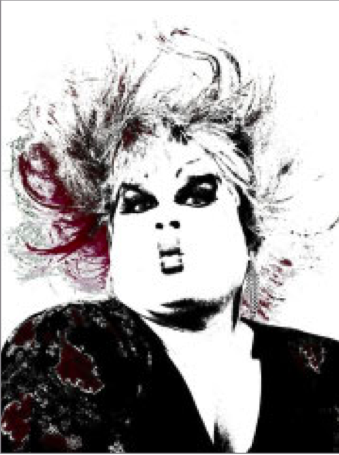 Where in the hell did June go? My goodness! Suddenly, I’m a 53-year-old drag queen and find myself marveling at a 50 year-old movement that started at the Stonewall Inn when I was a three years- old princess and just starting to try on my mother’s jewelry.

As we recognize the beatings, broken bones, lost jobs, lost families, we must never forget what the fairies, the sisters and trans folk (anyone who couldn’t “pass”), had to put up with just to get us to today. Who would have thunk that two years ago, when everything was looking rosie, that now we would have a president who is taking away the hardfought rights of trans folk in the military and beyond.

Lucky for me, I still have the right to go glamping (that’s glamorous camping for you guys with no imagination). Lucky for all of us that Trump’s tariff s shouldn’t affect vodka too badly. While nearly 50% of the alcohol we drink may be affected by 25% tariff s, much of the vodka comes from Russia and you know Putin won’t allow ole Orange Face to tax that shit.

So anyway, as I turned another year older in June, I did go camping and woke up to a beautiful morning with great friends and yes, there was some vodka left. I’m reminded what is important to me: My relationship with my mother and to not ever let it go again, and my close friendships. It goes without saying, the importance of good vodka and great food.

Looks like my friend PJ, over at the FreeZone is having fun, both with his drag shows and his pool league.

Speaking of pool leagues, did you know that Las Vegas has some greatest leagues? Most of the bars participate. You can join one just by asking, or go see my friend Ryan on the Garage team. Hell, just ask any of the bartenders at your favorite, gay watering hole. It’s not just pool. There are even a dart board leagues in Vegas. Who knew?

If you’re not into those, you’ll find softball leagues, volleyball teams, hiking groups, bowling, e-gaming and yes, there’s even a knitting club around. Don’t mess with the “Garage Guy” on bowling night. The world could be ending and you’ll find him praying not to have a blowout (it’s a bowling term, dears!).

Sometimes, I admit, I’m a bad drag queen. I don’t watch the RuPaul Drag Race and most those queens are not my favorites. I am an old queen and just can’t get into that show. Too much fake crap. RuPaul needs to do a drag race for over 40. Now, that would be funny! When I came out as queer, tea dances were the thing and beer bust was 25-cents. Music was on vinyl, and no cell phones! I miss meeting a hot guy without Grindr.

As I’m doing the fi nal edits on this column for the July Spectrum, it’s closing day at the Bastille (see photos on other pages). Farewell to Ralph, Dominick and the old Snicks Place. Hopefully the Mother Ship (Garage!) and other bars will fi nd spots for the bartenders.

Let’s hope the LGBTQIA+ art from the Vegas Bi-Centennial, done by Grace Morgan and Lois Dohra, on the side of the Snick’s/ Bastille building, survives whatever is next.

My understanding is the building and property was sold. Rents went through the roof but the parting was amicable. It’s business and ya’ do what ya’ gotta do, and that often means jacking up the rent. I know Guy and Robert are looking for a new location and Godspeed!

Badlands roars on, now owned by the boys from QuadZ. Luther Lovins hosts Badlands Bingo every Monday from 12:30 p.m. (just after some of you girls get up!) and it carries on until 3 p.m. Our friend John Eisele does Humpday Karaoke at 9 p.m., but the singing gets started about 10:30 p.m

John’s Humpday Karaoke is getting a little help from The Holy Order. The Sisters, who do such fabulous (and spiritual!) work in the community, are helping out. It’s just a short stroll across the parking lot from their Nunnery (second fl oor of Carriage Trade Center). Last Wednesday, I spotted publisher Rob, hanging off the arm of Izzy … er, I mean (novice) Sister Maria Isabella Victoria, his ex. I quickly looked around to make sure Lucas (Rob’s hubby) didn’t see him. Lordie! There was Lucas on Sister Maria’s other arm, posing for a damn photo. John’s tips are going to the Sisters, so bless you, John!

Over at The Eagle, it’s Crazy Britney Glam and DJ-TJ are killing it on Tuesday and Friday with underwear Karaoke. On Wednesday Bingo with Jimmy Emerson. Thursday it is Hot Bod contest with Jimmy and me on music detail. Believe me I am no DJ but I get it done.

As I’ve mentioned earlier, I love camping and hanging with close friends on the mountain. Last month, Vita Drew from Menopause and I had a gig, doing a Celebration of Life at Mt. Charleston Lodge for Jon Gathercole. You may remember his obituary from the April Spectrum. Jon, and his life partner Claude Raffin, had been together for almost 42 years!

Claude threw a fabulous party to celebrate the life and creativity that was Jon. About 70 of us toured a cabin Jon was having built nearby. Alas, he was never able to see it finished (nor were we, long story!). Vita sang and entertained outside on the Lodge’s deck. No one thought it would be as cold as a witch’s tit in a brass bra, but fortunately I was wearing cotton.

Jon, a loveable, fun drag queen at heart, was known for doing, “These Boots Were Made for Walking.” I was able to end the party on a comedic note, with my version of the song. I hope Jon would be proud.

What’s up with that bitch Frank Marino? We should all know as soon as Johnny Kats from the R-J twitters this Tuesday and publishes his R-J column on Wednesday, conveniently just after my press time. Oh well, I have something he doesn’t have and won’t ever get. Frank won’t even know this until he reads it in print, so do share!

A close friend’s medium (a psychic, guys!), says this whole clusterf**k (my word, not hers) will be the best thing that ever happened to Frank’s career. He’ll come out, more on top than anyone can even imagine.

I didn’t see the photos from the cover photo shoot, but I saw them being taken over at Cowabunga Bay. I missed seeing him with his shirt off , but Gary Brewer, manager of Entourage, was there and man, does he have sexxy hair swirls along the neck of his t-shirt!

While we’re talking sexxy, I made the editor put the Aussie Heat ad on my page (yeah, I own it, bitch!). Those boys are beyond hot! I was also lucky enough to get invited to Blond Invasion, also at the Planet Hollywood V Theaters, and a couple of the Auzzie Heat guys were backup dancers for the girls. Talk about heat! Those guys have such heavy costumes, I would love to be backstage, helping them take those sweaty things off . Damn! I understand that’s Logan Seven’s job – he’s assistant manager for Aussie Heat – what a great job for a gay boy!

A reminder to my friends who like good food and fi ne men (that’s pretty inclusive). There are coupons in this magazine. It really, really helps if you clip and use them. Keeps the business coming.

Woof, woof, wag, wag! to the boys at Three Dog Bakery. Show your puppy some love from 2110 N. Rampart Blvd. All natural food and treats. Kind of a Whole Foods bakery for our best friends.

One final thought: What does Fab have in common with a Kamikaze pilot? Neither were too successful, but there is an inevitable outcome for the pilot. You’ve got to wonder how good it was for business to insult and defame half the LGBTQIA+ community.