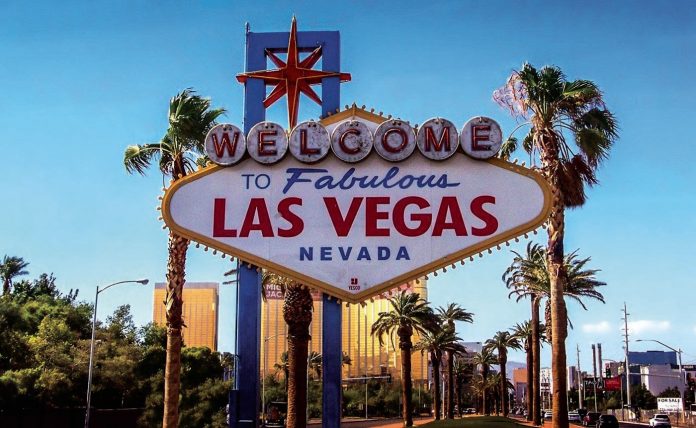 The point of lighting up thousands of performance landmarks in red in Las Vegas and over 75 other cities across the country was to bring awareness to the plight of live events businesses that have been shut down since the start of the COVID-19 pandemic and to the thousands of live events workers who have been without a paycheck since March.

The coalition is urging Congress to immediately pass a comprehensive relief bill that includes the RESTART Act to provide loans to jump-start such hard-hit businesses as Las Vegas’s live events sector through the remainder of 2020, as well as an extension and expansion of PUA and FPUC to cover live events workers, many of whom were left out of the initial pandemic unemployment relief.

Without the relief provided by RESTART many of our community theaters and performance venues may remain dark even after the vaccine. At the very least we may lose some of our most talented and experienced live performance workers who simply could not afford to wait until the stage lights came back on.

A Public Fit Theatre (APF) is kept the home fires burning in September with a workshop reading of a new script, “Alvie: A Nouveau Cirque Play,” streaming on YouTube Sept. 17-20.

“Alvie” is a coming-of-age story set behind the scenes at a contemporary circus show in a Las Vegas resort. The reading was recorded entirely on Zoom and edited as a “living storyboard” for what will eventually be a fully realized concept.

The workshop reading event was free to view, but with a request for donations to HopeLink of Southern Nevada to provide relief for those hardest hit by the pandemic, many of whom include our live performance workers.

The Las Vegas Little Theatre posted the sad announcement on their website at http://www.lvlt.org that this cherished community theater must remain closed under Gov. Sisolak’s mandate that prohibits live performances.

LVLT had continued to optimistically reschedule the start of their 2020-21 season, but in the September announcement said that they planned to replace the first three live shows of the season with online shows.

Continuing through September was LVLT’s clever on demand stream of
Pulitzer Prize-winner John Patrick Shanley’s “Rogues’ Gallery,” an anthology of ten darkly humorous stories directed by Walter Niejadlik and Gillen Brey. The collection of monologues delved into the allure of bad behavior and the absurdity of being human and featured a host of LVLT favorites.

Also in September, LVLT presented “THE ABCs OF LGBT AT THE RAINBOW VALLEY B & B” by Phil Darg, winner of the 12th Annual New Works Competition. A conservative pastor and his are stranded by an early snowstorm at a bed and breakfast in Vermont along with the inn’s gay owners and a lesbian guest couple. The play was directed by Chris Davies and, no, it is not a murder mystery.

In time for Halloween, LVLT is presenting “Ghost Light Stories, Frightening Tales from an Empty Theatre.” The show will be presented on the Showtix4u streaming platform in October.

Broadway, TV, and film actress and SST alumna Satomi Hofmann will perform from her home in New York singing show stopping songs and performances from SST’s first 45 years along with some previews of the 2021 season.

Tickets are $45 per household and can be purchased at https://www.purplepass.com in order to access the live streamed program.

With a vision to the future, Opera Las Vegas (OLV) is developing an online video version of their long-standing educational program “Who’s Afraid of Opera?”

Tailored to middle and high school students throughout Clark County, “Who’s Afraid of Opera?” teaches opera basics, like the origins of opera, voice types, dramatic structure, and why and how people sing to express their feelings. OLV also plans to develop and disseminate work-study books and quiz questions to teachers to complement each 30-minute presentation.

OLV intends to make these presentations available to over 11,000 CCSD teachers to show their 320,000 students.

To help bring opera-oriented ‘infotainment’ to Clark County schools during this time of distance learning, OLV is seeking the support of Las Vegas Valley opera lovers at http://www.operalasvegas.com/support/.

Ironically, St. George Musical Theatre’s (SGMT) production of “The Man with the Pointed Toes ,” originally a 1958 teleplay by Lynn and Helen Root, is one of the only opportunities to see live theater in the Southern Nevada region.

Though starting out on the small screen, the romantic comedy found its way to the small stage in the 60s and has been enjoyed by repertory theater audiences ever since.

Noveau riche ranch hand, Tom hopes to improve himself to get his gal, and in the tradition of “My Fair Lady” he hires a librarian named Florence to teach him to say “get” instead of “git.”

The show plays Oct. 1–31 at the historic St. George Opera House on 212 N. Main St. in St. George, Utah. Tickets will be available at http://www.sgmusicaltheater.com . SGMT practices social distancing and masks are required. Worth the drive to see it live.

Vegas City Opera (VCO) is launching their 11t h season in challenging times with a celebration of #VEGASSTRONGER.

VCO artistic director, Skip Galla Katipunan said, “This pandemic has led us all to dig deep into our creative wells.” He said, “We have crafted a grippingly innovative season like you’ve never seen before.”

The epic (some would say bloated) four-part opera has been thankfully slimmed down by Maestro Dennis Doubin (San Francisco Opera, Los Angeles Opera) into the essentials of theme, story, and leitmotif.

American Gods, Heroes, Valkyries, and Rhine Maidens scour Las Vegas streets on their quest for the magic Ring in the VCO version.

The purchase of tiered tickets will bring a cast of gods and demi-gods to perform and videotape a section of the digital broadcast on your doorstep as they “Ring” your doorbell.

Filming on locations across Las Vegas is happening now through November 2020, so don’t be too startled if you see a horned maiden, a giant or a dragon during your commute.

This truly heroic production will culminate in two online watch party events on Dec. 12 of “Das Rheingold” and “Die Walküre” at 6 p.m., with a rebroadcast on Jan. 2 at 4 p.m., followed by “Siegfried” and “Götterdämmerung” at 6 p.m., as VCO unveils their entire Vegas Ring in just three hours! It won’t be over until the full-sized lady sings.

Tickets priced from Gods at $200 per household down to Rhine Maidens at $25 per household include proportionate incentives, including an opportunity to make a cameo appearance at the higher price range. Get your horns on at https://vegascityopera.org/the-ring.

Coronavirus and quarantine and fires; the 2020 presidential election; Cancel Culture and #BlackLivesMatter protests. The unprecedented events of 2020 has compelled Vegas City Opera to stage a new song cycle created by Las Vegas artists and composers to give a collective voice to the challenges we have faced together this year, determined to come out stronger than ever.

The envisioned “2020: The Song Cycle” will Vegas City Opera’s first collaborative composition. VCO will be selecting submissions from local composers, musicians, writers, and artists to uplift our community through this collaborative work. “2020: The Song Cycle” will be presented in May of 2021. For more information or for submission guidelines, visit http://www.vegascityopera. org/2020-the-song-cycle

Troy Heard artistic director of the Majestic Repertory Theatre has come up with an innovative way to keep local theater alive while socially distanced by inviting audiences and supporters to subscribe to the theater’s virtual programming via Patreon. https://www.patreon.com/majesticrep . Different levels of support give different levels of access to a variety of Majestic Rep’s always creative shows.

A current project taping for future online streaming is “An Apology for the Course and Outcome of Certain Events Delivered by Doctor John Faustus on This His Final Evening.”

For those hankering to get out of the house, you can pick up your Limited Edition Majestic Rep Car Air Freshener through Oct. 11 at “The Parking Lot,” Majestic Rep, 1217 S. Main St., downtown Las Vegas. Two pick-up times per night: 7 p.m. and 8:30 p.m. Only sixteen air fresheners are available per pick-up time.

The low price is just $50 per VEHICLE (not person). Pick-up times will last approximately an hour and will feature an ambient sermon by the Reverends Mike and Natalie on the parable of “The Parking Lot” by Adam Szymkowicz.

Fasten your seat belts for roller coaster ride called Their Marriage. “The Parking Lot” is a metaphor for life in 2020. Help them to chalk up their key moments as “pros” or “cons” as you decide the next steps in their lives. Immersive theater without having to get out of your car, directed by Troy Heard.

As We See It: Safeguarding our elections