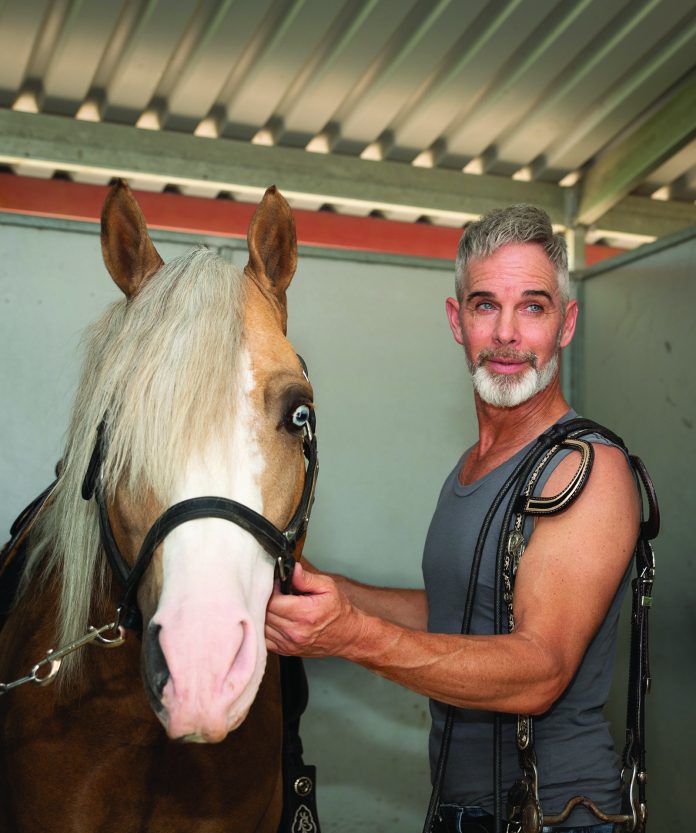 By ROB SCHLEGEL AND LYN COLLIER
Photos by TONYA HARVEY

Andy Marlett is the head trainer at Stolen Aces Farms in the northwest part of Las Vegas. It’s on land that at one time was part of the original 1,600 acre Gilcrease Ranch.

Stolen Aces Farms is a 15-acre ranch and home to about 30 horses. They vary in ages, sizes, colors, stallions, mares and colts.

“We breed, raise, train and show the horses,” Andy explained. “We travel pretty much all over the western half of the country, showing and promoting our horses for sale and for pleasure. When we’re not traveling, the horses are for personal use. Sometimes, we ride around the ranch, sometimes along the streets in the northern part of Las Vegas where we have trails (on the side of the roads) instead of sidewalks. When I have time, I give riding lessons.

“In my personal time, when not at the ranch, I like shopping, ice skating at City National where I have a coach and I enjoy hiking in Red Rock, Valley of Fire and at Mount Charleston.”

He also enjoys the Las Vegas shows and spends a lot of time with friends.

When asked what first attracted him to horses, he said, “I don’t remember a day that I didn’t want a horse. (Early on), I wanted a pony so bad, I begged and begged for a pony until I got one at the age of 10. I got the horse at the same time. It was the best part of my childhood and it’s what led me into the profession I have.

“It’s literally what brought me to Las Vegas.”

The lesson he wants to impart to all kids reading this is, “Don’t give up! Keep asking for those ponies!”

“I grew up in northern Minnesota (near Bemidji). I spent much of my adult life in Minneapolis where I had my own business training and showing horses, professionally. I was offered a job here in Las Vegas.

“Having never been here before, I knew no one other than Christina DiGioia. She got me involved in the Human Rights Campaign, where I started volunteering to meet people.”

“I volunteered (with HRC) at the Las Vegas Rescue Mission, serving meals. Helping out with some of the fundraising around town and volunteering for a variety of projects.”

The horse Andy rode for the Spectrum photo shoot is Fabio. “He’s a 6-year-old Morgan Stallion, western pleasure horse, which we purchased for the ranch about two years ago. I’ve been preparing him and getting him ready to be an amateur horse for my employer (the Sturm family).

“Fabio is just now coming into his own. We’ve bred him to a few mares. His first babies are just hitting the ground right now and we’re proud of that. We’re psyched about that!

“He’s such a crazy color and he’s showing he can produce that. He’s pretty rare. His color is called ‘palomino perlino’ and he has two blue eyes. He’s also double registered as a pinto, as he has enough white on him. He’s kind of a genetic freak, and that’s why we bought him. He stands 15.2 hands tall.”

Marlett has been training horses since he was 12.

He studied equine science at the University of Minnesota where he met Morgans for the f rst time, and later opened a barn in 1987 in Minnesota training Morgan horses.

He doesn’t like to measure his success in ribbons, but he once brought seven horses to Nationals and of those five won world championships.

Other outdoor activities
There are a variety of day trips for outings around the valley, groups that lead hikes and sports activities. Here is a short list of selections.

● Valley of Fire
This state park, which is about an hour’s drive, from the valley is famous for its bright red sandstone rock formations. Camping available. Park fee is $10, parks.nv.gov/ parks/valley-of-fire.

● Mount Charleston This a forest of pine trees in a national recreation area. It’s at least 10 degrees cooler than the desert fl oor. Camping, hotel lodging is available. Area has lots of hiking trails. A useful website on the area is gomtcharleston.com.

● Lake Mead National Recreation Area
In just over 30 minutes, Las Vegans can enjoy water sports, hiking, camping and fi shing. Margaret L. Goodro has been hired as the new park superintendent. Goodro, along with her spouse Melinda and their dogs Qynn and Moose, will be moving to Nevada in late April. There are scheduled events throughout the year. For more information, visit nps.gov/lake.

● Death Valley
It’s about two-and-half hours, hikers can visit one of the hottest places on Earth. The park missed a superbloom this year, and Scotty’s Castle is closed. Still, May is a cool month to experience the unique place. Check nps.gov/deva for road closures.

● Clark County Wetlands Park
The park is on the eastside of town. There is no fee. The Nature Center holds activities year-round. Hiking trails provide viewpoints of the area’s wildlife. Ben Jurand is the program supervisor for the park. For more information, visit clarkcountynv.gov/parks/Pages/cc-wetlands-park.

● The LGBTQ Volleyball Social At Sunset Park
It’s not a league; it’s just a fun social, according to organizer Johnny Espinosa. Anyone can join for the monthly meetup for barbecue, volleyball and socializing. The group meets from 8-11 p.m. every Saturday. Other nights vary weekly. Check Facebook: LGBTQ Volleyball & BBQ social. For more information, call Espinosa at 202-425-2047.

● LIZ in Motion
This is a social group for Las Vegas area lesbians. Members must register at meetup.com with a photo and full name. Search for the group’s full name to find details about monthly events. There is a May 5th brunch planned. A Red Rock hike is set for May 18. On the last Friday of the month, the group meets for billiards. Bowling at the Gold Coast is on for the fourth Saturday of the month. Stacey Gray is the group’s coordinator.

● The Las Vegas Aviators
The team, formerly known as the Las Vegas 51s and Las Vegas Stars, got a new name and a new home in April. The Triple-A baseball team is now housed in The Las Vegas Ballpark in Downtown Summerlin. Officials said the Aviators is hosting a Pride Night in June. For more information, visit thelvballpark.com.

● Hike the Nevada Big Five
With 320 named mountain ranges, more than 172 summits and eight ultra-prominent peaks, Nevada is the most mountainous state in the lower 48. With sunny days and mild temperatures, the state’s fi ve tallest peaks are well worth the climb. Hit the road this spring to discover them all. 1. Mount Charleston: 11,916 feet (part of the Spring Mountains National Recreation Area). 2. Mount Jeff erson, 11949 feet (part of the Alta Toquima Wilderness in central Nevada). 3. Mount Moriah, 12,073 feet (part of the Mount Moriah Wilderness north of Ely).

● Goldfield
It’s a five-hour drive but for history it’s worth it. A Nevada ghost town that off ers a musuem, train ride and tour of the mine. A good website to visit is goldfieldghosttown.com.

● Logandale
This little town is just under an hour’s drive for Las Vegans. Bird watchers love it. It also has a musuem.

● Overton
Best known for its Lost City Musuem, this town is near Valley of Fire. A good website to visit is nvculture. org/lostcitymusuem.

● Tule Springs Fossill Beds National Monument
Is in the northwestern part of the valley. It is along US Highway 95 north of Aliante and Centennial Hills to Creech Air Force Base. The area is a fl ash to the ancient past. A good website to visit isnps.gov/tusk.

● Floyd Lamb
Another good valley spot is this city park with its ponds, picnic areas, walking paths and peacock residents.

● Gilcrease Orchard
This famous northwest valley 60-acre farm is open on Saturdays from 7 a.m. until noon. Dress to pick produce and leave the dog at home. The orchard is at 7800 N. Tenaya Way. A good website is thegilcreaseorchard.org.

● Henderson Bird Viewing Preserve
The city of Henderson maintains this facility at 350 E. Galleria Drive. It is open 6 a.m. to 2 p.m. through May. A good website to visit is cityofhenderson.com/ henderson-happenings/facilities/henderson-bird-viewing-preserve.

● Colorado River
A portion of the famous river flows across the Nevada/ Arizona borders near Laughlin. There are lots of activities to be had, such as river rafting, jet skiing, boating and fishing. A good site to visit is visitlaughlin.com/ listing/colorado-river.

● Pahranagat National Wildlife Refuge
This national park is about an hour-and-a-half from Las Vegas. The skies are so clear, local astronomers journey there to view the Perseid meteor showers every August. A good website to visit is fws.gov/refuge/Pahranagat/

Smoking in the LGBTQ community is nearly 70 percent higher, women...

Make life a journey, not a guilt trip