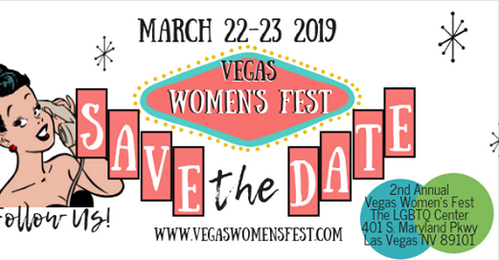 Get ready! Get set! It’s almost time for the second annual Vegas Women’s Fest! Returning to The Center, 401 S. Maryland Pkwy. This year’s event has been expanded to two days, March 22-23. The official kick-off party, “Behind the Mask” Masquerade Ball, will be held Friday from 7 to 11 p.m. Ages 21-and-older only.

It’s free, but masks are required to attend and will be available for purchase at the door for those without their own. Prices vary from $5 for your basic mask to $25 for a more elaborate, feathered mask. All proceeds going to support next year’s festival. The ball will feature DJ Devi Dev, a photo booth, a cash bar with drink specials and snacks. Costume contests for Best Overall, Sexiest, Most Humorous and, of course, Mardi Gras Gurl and Boi! Along with a raffle of over $1,200 in Las Vegas show tickets!

Why a ball? “We wanted to introduce a new kind of experience with the Masquerade Ball. It’s really about creating a feeling of decadence and intrigue. What better way to celebrate our diverse community of women than with a grand affair like a masquerade,” said the festival’s Marketing Director Joslyn Hatfield.

On Saturday, from 1 to 5 p.m., The Center will be bursting with action. A health fair, featuring numerous free services along with lots of information pertaining to health concerns for women. An art show spotlighting the talents of local female artists and includes an awards ceremony with cash prizes at 5 p.m.

This free event also features a marketplace, promoting female artisans and entrepreneurs along with numerous workshops, offering such topics as “Imagine a Woman in Love with Herself” and “Pain of Protection.”

New this year, will be a historical series entitled, “We Were There Too,” which will feature a display and information about an event in history that women have been erased from. Celebrating the women whose accomplishments have often been diminished, ignored or credited to men over the years. The focus will be on the early AIDS crisis and the women who were there as doctors, nurses and caregivers, risking their own lives to help and care for our brothers.

Finishing up the day’s festivities will be a drag king show hosted by Tatiana Lewis, known for promotion shows at the Phoenix. The show will star an array of studly drag kings for your viewing pleasure.

Musical guests will include Gwendy Joysen, a powerful singer/song writer from New Mexico and Riyah B., Las Vegas’s own queen of soul. Plus, the amazing Frankie Lee and The Infernos will share their rockin’ soul, one-of-akind stylings followed by the always rowdy and ready to party, all-female Irish band, Killian’s Angels, who’ve graced the stages of The Orleans Hotel, The Bellagio, Henderson Pavilion and were winners of the 2006 National Radio Honors.

“I’m really excited about the entertainment again this year. We have a couple of great people returning from last year, Gwendy and Frankie who were both just awesome and had everyone on their feet several times! New this year we have Riyah B. whom I’ve only seen in videos and can’t wait to see live. Then of course one of my favorite party bands, Killian’s Angels, who always blow everyone’s socks off , literally, with Ginger’s tuba,” said event organizer and founder Cindi Hall.

The festival is open to all women and their allies.

“Vegas Women’s Fest is truly a celebration of ALL women that emphasizes connection and community for women who identify as LGBTQ. But, it’s more than that. Everyone is welcome to join in the celebration. We see the event as an opportunity to foster genuine connection, which is why we are purposefully inclusive of transgender women, genderqueer and intersex individuals. All means everyone,” Hatfi eld said.

Hall agreed. “It’s our hope that both women and men will come out and help us celebrate women and all that we are and do. Women have done and continue to do so much for our society in general, we all need to take the time to acknowledge and celebrate all of those accomplishments.”