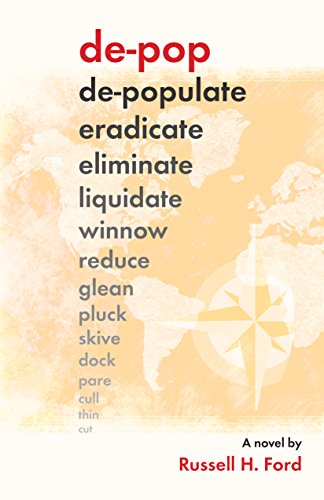 Readers of the Las Vegas Spectrum may have seen an ad for a book title depop written by Russel Ford. If the ad piqued your curiosity, here’s a bit about the book, its author and its connection to Vegas.

One reviewer wrote, “I have known Russ for over 40 years; not even I knew his heart was fi lled with such potential evil. But then, that’s why it’s fun to have him around!” – S.D.M., Seattle, WA

The book is about a secret plan to reduce the world’s population and the sinister methods used to accomplish that goal. Opposing that plan are operatives with their own secrets and just as sinister.

The main actors are Neah Bey, a fl awed human, torn between right and wrong in working for the under-government of the United States. Opposing Neah Bey is the Church, with an equally sinister cast of characters. Throw in big business and a wide range of characters and you have de-pop a captivating story of intrigue, skulldrudgery, and of course the outlandish imagination of the author, Russel Ford.

Neah Bey has a plan to slow the growth of the global populace. Blessed with brains, plus being backed by both business, government and experience n spycraft, he intends to preserve a higher quality of life for all. But he didn’t count on an attack from a proxy of the Church, with a history almost as devious as his own. Bey soon fi nds himself on the run with his wife Ione.

They must battle against an enemy they have never met. Former cop, Del Omak, drifted through life until a phone call transformed him into an unwilling agent of the Church. Ordered to bring down Neah Bey, he fi nds the job is harder than anticipated. Failure is not an option, and Del intends to get his man.

Ford captivates readers with a wide range of characters and varying perspectives. He fuels your curiosity and encourages you to look at the world in a new light.

Like all good fiction writers, it’s incumbent on them, as best as possible, to blur the separation, the division, and the edges of the truth with the story. The reader has to feel the threat to perceive the intent of the story. At every turn, the writer is required to blur, to confuse, and twist the truth. The best fiction leaves the reader asking, “What is the truth?”

The Las Vegas connection is rather simple. Spectrum publisher, Rob Schlegel, attended high school with Ford and they both wrote for the school newspaper. Russ writing sports and Rob writing news. Schlegel had read the book when published and enjoyed the mystery. When Russ heard that Rob was getting back into the publishing business with the Spectrum, he was the first to step forward and purchase an ad.

Pajtim Statovci’s ‘Crossing’ deals with gender identity in the world