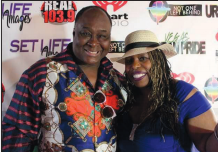 The Vegas Urban Pride Awards and Kings’ Birthday will be held April 11-12. Both are fundraisers for the Pride event in October.

The Vegas Urban Pride Awards is a peer-to-peer voting ballot. Winners are selected by popular vote for each category. Nominate an influencer living and actively conducting business in the Las Vegas community to be recognized for their talent or services. Nominations are open through March 4. The top four in each category with the most nominations will make the official VUP Awards Ballot. Finalist voting will begin March 7-28. Winners will be announced at awards ceremony April 12 at 5 p.m. at Hamburger Mary’s, 1700 E. Flamingo Road. Tickets and event information visit www.vegasurbanpride.com.

The event will include cocktails and free hors d’oeuvre and after-part live DJ. Free HIV testing will also be offered.

Q Social moved to second Thursday Happy birthday to us! The Spectrum belatedly celebrated its first year in February at its first Spectrum Q Social. The event has been moved from the third Thursday to the second Thursday of the month. This month’s Q Social will be held March 12 at Hamburger Mary’s from 5:30 p.m. to 8 p.m. Many of the staff members are pictured at right.

Onstage: ‘Scalia/Ginsburg’ opera at UNLV; Alvin Ailey at the Smith...

TransPride Week kicks off March 31 at the Center