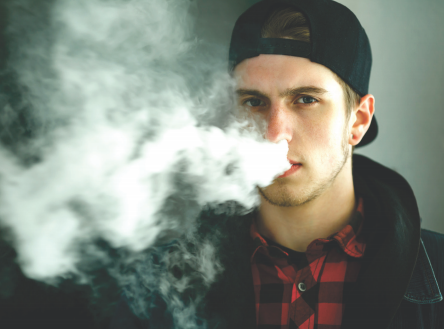 With more than 2,000 people who use vaping products suffering serious respiratory injury and some 40 known deaths, the safety of vaping has come under new scrutiny. Many communities have moved to ban the sale of vaping products.

But are we reacting too fast to limit that sale of a product that some say helps to reduce tobacco dependency?

Combustible tobacco use is the leading cause of disease and death in the United States, resulting in some 483,000 deaths each year.

At the height of the tobacco dependency epidemic in the U.S., 50 percent of the population smoked. Thanks to tobacco-control efforts and smoking-cessation programs, that number has dropped to less than 20 percent, even in states like Nevada where smoking is still allowed in casinos and bars.

“What’s so scary is that vaping has become so popular,” said Kimberly Rogers, program manager at the American Lung Association in Nevada, “E-cigarettes are not merely substituting for traditional combustible cigarettes. E-cigarette use is occurring in adolescents who would not otherwise have used tobacco products.”

Tobacco dependency disproportionately impacts the LGBTQIA+ community because of cultural and historical factors unique to the community and because Big Tobacco specifically targeted LGBTQIA+ community events like Pride with advertising and giveaways.

Vaping, according to Rogers, has transcended niche marketing to communities disparately impacted by tobacco use, such as the LGBTQIA+ community, and has spread to the general population.

“I give presentations to parents and their kids on the dangers of using e-cigarettes, and many parents come up to me afterwards and tell me they vape.” Rogers said.

Many believe that vaping is only dangerous when mixed with non-nicotine ingredients such as CBD and THC.

Dr. Michael Laymon, professor and director of the School of Physical Therapy at Touro University Nevada, said: “You have to look at vaping and CBD use independently of each other. Both are risky on their own. When you combine them, you add risk.”

Laymon first began to research the effect of CBD on mice in the 1970s. Today, he is considered an expert on cannabis, hemp, CBD and vaping.

“I grew up in the 1960s, so I was interested in doing research related to marijuana,” he said.

Laymon understands why vaping CBD is so popular. “People see vaping as safer than smoking and CBD as a safe product to use to reduce pain.”

When people who vaped started suffering respiratory injury and dying, the immediate question was what ingredients in vaping products were causing it.

Which sounds simpler to figure out than it is because no one really knows what is in any particular vaping or CBD product.

Robin Kovel, CEO and president of the Truth Initiative said: “You know more what’s in a bag of potato chips than what is in a JUUL.”

Laymon said that with either CBD or vaping products the user has absolutely “no idea what they are sucking into their lungs.”

Neither is regulated by the U.S. Food and Drug Administration or the industry, he said. “A manufacturer can list any ingredients on the label.”

For example, a study in the Journal of the American Medical Association (JAMA, Nov 2017, Vol 318, No 17), identified greater than 87 percent of vaporization liquid, 75 percent of tinctures and 55 percent of oils were mislabeled just for CBD content, let alone the multiple other ingredients that go into a typical vaping product. Just as there is no regulatory oversight for content, there is also no quality control even when ingredients are accurately listed. And that’s for industry-produced products, content and quality get even sketchier for cheaper, street-sold vaping products.

Even if a grower is licensed, conscientious and reputable, Laymon said, dosing is still “a challenge since each grow and crop is different – even from the same grower.

“And, what happens if there is an issue with mold or contamination?” he asked. “Without FDA or USDA (U.S. Department of Agriculture) control, there is no governing body to protect the public. When there is a salmonella scare for lettuce, the world knows about it and is told to avoid it. Nothing like this exists for the cannabis or hemp industries.”

Despite these obstacles, medical detectives at the Centers for Disease Control and Prevention have narrowed down the suspected culprits in the recent spate of vaping related illnesses and deaths to at least one possible agent.

Dr. Anne Schuchat, the principal deputy director of the Centers for Disease Control, reported on Nov. 8 that its investigators had found that vitamin E acetate, an additive sometimes used in THC and other vaping products, may be to blame for the national outbreak of vaping-related lung injuries and dozens of deaths.

“This does not rule out other possible ingredients. There may be more than one cause,” Schuchat said.

Touro University’s Laymon said that vitamin E oil is used in vaping products to enhance and preserve product flavoring. He said the oil is very sticky and when inhaled lumps together in the lungs and doesn’t clear out of the lungs easily.

He also pointed to diethylene glycol, “which is basically antifreeze” and is added to vaping liquids to enhance flavoring in cheaper or street products. Similarly sounding to propylene glycol, it is quite different. Propylene glycol is found in more expensive, industry-manufactured vaping products and is safe for human consumption. It is an ingredient that is used in inhalant medications.

Laymon said that a third chemical, diacetyl, has been used to give butter-like and other flavors to food products, including popcorn. Lung disease in workers exposed to the chemical in manufacturing is called “popcorn lung.” The chemical is used in vaping products to transfer flavors and to make the flavors richer. Laymon said diacetyl closes off the small airways in the lungs making it difficult to breathe.

People who smoke and who are in denial about the harm that smoking can cause often search for the elusive “natural” cigarette, free from all harmful additives. They do not want to acknowledge that nicotine in and of itself is addictive and harmful.

Nicotine restricts blood vessels increasing the risk of high blood pressure, heart attack and stroke. Nicotine also contributes to an increase of cholesterol and increased risk of blood clotting. Like THC, nicotine can also impact the development of the adolescent brain.

Similarly, even apart from these various harmful chemicals added for flavoring that have been directly implicated in the recent illnesses and deaths associated with vaping, nicotine and CBD in vaping products can alone cause harm.

Laymon is an orthopedic clinical specialist and serves on the National Pain Advisory Board for Pfizer and is a recognized expert on pain management. He also serves as chief of research at Touro University Nevada and though he is a champion of doing more research to better understand CBD’s properties, effects and benefits, he said the evidence of benefit right now is lacking. Cross over double-blinded control studies, the standard of research for pharmaceutical products, don’t exist for CBD and THC products, he said.

Eighty-seven percent of those who became ill from vaping used products containing THC. Even if those illnesses are subscribed only to additives like vitamin E acetone, breathing in heated combustibles or aerosols burns the cilia lining the bronchial tubes and destroys the self-cleaning capacity of the respiratory system leading to “smoker’s cough” and chronic obstructive pulmonary disease (COPD).

In addition, heating tobacco, marijuana or vaping liquid ingredients changes their chemical content and creates effects in the body different and more harmful than the unheated ingredients themselves.

CBD can also adversely interfere with prescription medications with potential deadly effects. For example, it can inactivate antivirals impacting the effectiveness of HIV and PrEP medications.

Likewise, it prevents the breakdown of the blood-thinning medication warfarin used by post-stroke and blood-clotting patients increasing the risk of blood hemorrhages.

Laymon said: “THC affects certain parts of the brain controlling hallucinogenic qualities.” It also causes changes in some areas of the brain that can result in psychosis and other behavioral changes, he said.

From a pharmacological perspective, Laymon said, when external chemicals are introduced into the brain, we don’t really know what they are doing, especially among adolescents, whose brains are still forming and integrating on a global basis.

E-cigarettes were originally developed in China to reduce that country’s tobacco addiction epidemic. Although not shown to be safe and effective as a smoking cessation treatment by the FDA, Laymon said that some evidence exists that vaping can help adults who are trying to quit smoking. But he said with adolescents it is just the opposite, “Kids who vape transition to combustible tobacco.”

To combat the explosion in youth vaping, the American Lung Association in Nevada has been funded through the PACT Coalition to implement Catch My Breath, an evidence-based e-cigarette prevention program in middle schools.

The Catch My Breath program educates youth on vaping risks, equipping them with refusal skills and reinforcing non-vaping norms.

The Lung Association Program Manager, Kimberly Rogers said that cessation programs to quit vaping are available, and being developed, because vaping is not your father’s cigarette. “Vaping represents a much higher level of nicotine use,” she said.

Rogers pointed out that e-cigarettes have been sold in the U.S. for less than a decade and the mid- to long-term consequences of e-cigarette use are not yet known.

“We are very troubled by what we see so far. The inhalation of harmful chemicals can cause irreversible lung damage and lung diseases in young users,” Rogers said. “There are parents looking for alternatives to help their teens quit, including in-patient nicotine dependence treatment for e-cigarette use and vaping.”

She said adults who have tried nicotine-replacement therapy to quit report needing to wear up to three nicotine patches at a time to get the same dosage as they get from vaping.

He said National Jewish Health, the operator of Nevada’s Tobacco Users Quitline, is revamping the Quitline’s marketing to reach out to youth who vape.

Dr. Thomas Ylioja, clinical director of health initiatives programs at National Jewish Health told CNN: “We launched a specific teen quit line, which reflects that teens want to make their own decisions. They don’t want to be told to quit. … The decision to stop is theirs, and we’re here to support them.”

CNN reported that the My Life, My Quit tobacco and vaping cessation program is designed for kids younger than 18. Teens in Nevada can call or text the Helpline at 1-855-891-9989 or go online to mylifemyquit.com/. CNN says teens will then be routed to a trained youth coach who can provide free and confidential live counseling sessions.

The Truth Initiative also has an online texting cessation program geared toward youth, called This is Quitting. This free mobile program features messages from young people who have attempted to, or successfully quit, e-cigarettes. To enroll, teens and young adults can text DITCHJUUL to 88709.

The American Lung Association in Nevada is gearing up with a new intervention program called, INDEPTH, or Intervention for Nicotine Dependence: Education, Prevention, Tobacco and Health.

Rogers of the Lung Association said “INDEPTH is a new, convenient alternative to suspension or citation that helps schools and communities address the teen vaping problem in a more supportive way. Instead of solely focusing on punitive measures.”