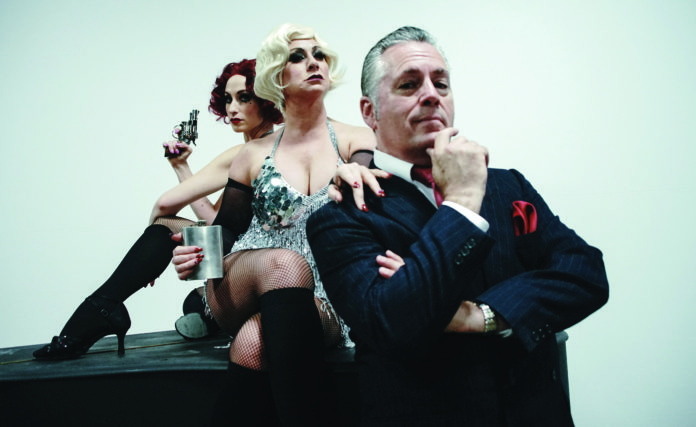 Bob Fosse wrote the musical, along with classic songwriting duo John Kander and Fred Ebb, for Fosse’s wife, Gwen Verdon, who originated the role of Roxie Hart in the show’s original run in 1975.

Although the musical marked the return to Broadway of the Fosse-Verdon team after the triumph of “Sweet Charity” in 1966, Heard points out that the show opened opposite the Broadway juggernaut, “A Chorus Line,” and was overlooked by Broadway audiences and the Tonys, although it did have a respectable run.

The 1996 Broadway revival won a then-record number of Tonys for a revival and is the longest-running Broadway show in history. What made the difference?

Director Heard thinks O.J. did it.

“The revival opened just after the O.J. Simpson murder trial, which had mesmerized the nation with a celebrity who got away with murder.”

“The show is a celebration of the criminal,” Heard said, with dueling murderers Roxie Hart and Velma Kelly, each vying for the true crime limelight that will make her a star.

Though Heard is bucking the Broadway revival’s minimalist blackand-white staging to return to the show’s gawdy vaudevillian roots, he’s not afraid to tackle the show’s darker undertones. He said, “There’s a fearlessness in taking things to their rough edges.”

Heard has teamed up with choreographer Kimberly Amblad, who worked with him earlier in the season on Majestic Repertory’s well-received production of another Kander and Ebb classic, “Cabaret.”

The musical play’s characters are all modeled on famous vaudeville performers, such as Big Mama Thornton, Al Jolson and Mister Bo Jangles.

Heard says “Chicago” has a Jazz Age restlessness. “Once the show starts,” he says, “it never stops, never slows down. That’s what’s magical about it.” Heard is staging the show as a vaudeville-style satire that is PG-13 in its bawdiness. But don’t worry LGBT moms and dads, SST will be following “Chicago” with the family-friendly, “Annie,” Aug. 23-25.

Tickets for the Summer Series at Spring Mountain Ranch are family-priced at $15 for general admission. All performances are outdoors. Food and refreshments are available. For more information, call 702-579-PLAY (7529) or visit supersummertheatre.org.

Produced by HootieCate Fine Plays and directed by Joe Hammond, the harrowing plot of “Rattlesnakes” follows Robert McQueen, a gigolo, who offers sex to the wives of busy husbands. McQueen sees himself as a businessman who offers a vital service to unfulfilled and lonely women. But the three men who have just taken him hostage fail to see their wives’ infidelity in such a compassionate light: they’re going to take McQueen to pieces and beat a confession out of him. What they hear will change their lives forever.

Farrow’s stinging exploration of betrayal, sex and failure was first per formed in 2001 at the Flatiron Playhouse, New York. It has just been released as an independent film directed by Julius Amedume and starring Jimmy JeanLouis. The film won the Audience Award for Best Narrative Feature at the 2019 Los Angeles Pan African Film Festival.

“Oregon Trail: The Play!”
Western HA! “Oregon Trail: The Play!” an irreverent comedy honoring/ skewering the video games from the 1980s and 1990s is playing Saturday nights at 10 p.m. at the Majestic through Aug. 31. Join the Bootsmeyer family as they head the wagon west and pray they don’t die of dysentery before hitting the promised land of OREGON! For ticket information for all Majestic Repertory shows, go to https://tickets. vendini.com.

Las Vegas Little Theater
Join LVLT for its upcoming season’s preview — FREE – on Aug 17 at 8 p.m. and Aug. 18 at 2 p.m. Local actors give a synopsis of each show and perform a short scene or song from LVLT’s 2019/20 Mainstage and Black Box season.

Opera Las Vegas
Join Opera Las Vegas for the preview party of their magical 20th anniversary season on Aug. 15 at 6:30 p.m. at Mario Basner Fine Arts Gallery in Tivoli Village. Tickets are $20 online or $25 at the door. RSVP at operalasvegas.org. Light refreshments will be served, four stars of opera will be shining. The party is hosted by OLV General Director Jim Sohre.

Vegas City Opera
Vegas City Opera will reveal its 10th anniversary season at a free Celebration Concert at the Summerlin Library and Performing Arts Center on Aug. 3 at 7:30 p.m. Executive Director Ginger Land-van Buuren said that the upcoming season will be a “Celebration of Women.” She said, “We have put together a true celebration of female talent and artistry into our celebration.” The highlight of the new season will be Vegas City Opera’s production of Donizetti’s, “The Daughter of the Regiment” at The Smith Center and featuring Las Vegas’s beloved opera matriarch Luana Devol of Opera Las Vegas as the Marquise of Berkenfield, long lost mother of the daughter raised by the regiment battalion. Vegas City Opera also will be the resident opera company at the Amargosa Opera House near Death Valley National Park as the historic opera house celebrates its 52nd season bringing culture to the desert. The company will launch a State Opera Tour with concerts in Tonopah, West Wendover, Laughlin, Mesquite, Boulder City and Pahrump. Catch their Viva Las Popera concert at the Tonopah Convention Center on August 24 at 7:30 p.m. Visit vegascityopera.org for more information about the upcoming season.

Arizona Opera
Don’t miss out on tickets to the two hottest regional opera productions coming this fall to the Arizona Opera in Phoenix. The world premiere of “Shining Brow,” composer Daron Hagen’s retelling of visionary American architect Frank Lloyd Wright’s operatically dramatic early life is anything but conventional. “Shining Brow” is the translation of the Welsh “Taliesin,” which was the name that Wright gave to his homes in Wisconsin and Arizona where an affair with a client’s wife, murders and a devastating fire drove Wright’s passion and determination to rebuild his life in this compelling tale. John Moore and Rob McGinness share the role of Wright in this production conducted by Lidiya Yankovskaya and directed by Chas Rader-Shieber with scenic and costume design by Jacob A. Climer. Sept. 27-29 in Phoenix and Oct. 5-6 in Tucson.

“Fellow Travelers” tells of a recent time when it wasn’t safe to love.

This stunning new opera with music by Gregory Spears and a libretto by Greg Pierce is based on the 2007 novel by Thomas Mallon. Set during the McCarthy-era Lavender Scare, a chance encounter between an ambitious college graduate, Timothy Laughlin, and a handsome U.S. State Department official, Hawkins Fuller, results in Laughlin’s first job — and his first love affair.

Drawn into a maelstrom of passion and deceit, Timothy struggles to reconcile his political convictions and his “forbidden” love for Fuller. The powerfully compelling production is an ode to the importance of being one’s self and the bravery it takes to stand up to oppression.

Jonas Hacker plays Laughlin and Joseph Lattanzi is Hawkins Fuller in this production conducted by Daniela Candillari and directed by Marcus Shields based on an original concept by Kevin Newbury. Must see opera Nov. 8-10 in Phoenix and Nov. 16-17 in Tucson.

See both operas for as little as $44 with the McDougall RED Series or purchase single tickets at www.azopera.org/single-tickets-sale.