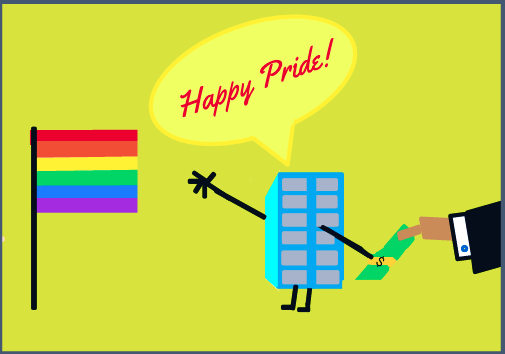 Pride is celebrated across the nation, mostly around June, but here in Las Vegas, it’ll be with a night parade on Saturday, Oct. 11 and a festival on Sunday, Oct. 12.

While the celebration of pride is about “coming out” and being proud enough to tell the world about one’s sexual orientation, over the years it’s grown into more of a huge party. Part of that has to do with corporate sponsorships, whose money helps fund these lavish events.

With today’s political climate being as toxic as it has become, primarily due to conservative elected officials, there is a new movement to call out two-faced corporations. These are corporations who, on one hand claim diversity, tolerance and support of the LGBTQIA+ community, but then turn around also support elected officials and organizations who work to take away the LGBTQIA+ rights.

Many of these same corporations also appear on the Human Rights Campaign (HRC) Corporate Equality Index, often receiving 100% scores for equality in the workplace. The issue is, many of these corporations also donate to Members of Congress who receive a failing grade of 0% on HRC’s Congressional Scorecard – a discrepancy HRC has yet to address.

Nine corporations, who each scored 100% on HRC also participate in pride festivals, often as corporate sponsors and parade contingencies. These nine also give money to political candidates. Below are the amount given to candidates who score 0% on the HRC political scorecard. The list was compiled by Popular Information.

In Las Vegas, our local Pride organization does not show any of these nine listed as corporate sponsors, but at least AT&T, UPS, FedEx and Verizon usually have contingencies in the pride parade and the AFAN AIDS Walk. Most usually purchase booths at our local pride festival.

Las Vegas Pride does have several radio stations which are shown as corporate sponsors. These stations are owned by corporations which also own, mostly AM radio stations, which spew toxic hate speech, such as Rush Limbaugh, Michael Savage, Sean Hannity, Glenn Beck, Mark Levin, Laura Ingram, Rick Burgess and others.

One radio talk show host compares gay marriage acceptance to the normalization of pedophilia. The mega-radio corporation which runs this talk show, oddly enough, also owns Channel Q, which promotes itself as “an innovative media destination built for and by the LGBTQ+ community and our allies.” One must wonder how “allied” the parent corporation, Radio.com, really is.

More importantly, when attending pride or an HIV-related event, one should show this article to representatives of these corporations

On lesbians, Jesus, the Million Moms and the Hallmark Channel