Transgender activist Marty Brown was a diabetic with complications. His wife, Tracey, said he had been sick since the beginning of March with what he thought was a bad cold.

On March 14, they went to the emergency department at Mountain View Hospital to get it checked out. Because of his frequent hospitalizations due to his diabetes, Tracey said, “We knew he would be admitted, but I had no idea it would be his last time in the hospital.”

Marty was diagnosed with the flu and pneumonia and admitted to the hospital. Tracey says, “The last day I was able to see him was on the 18th. On the 19th, they closed the hospital to all visitors.”

Up to that point, Tracey said she would spend the entire day with Marty at the hospital. She said, “I wasn’t masked or gloved, or anything. The nurses weren’t masked either.”

Tracey says that on the 19th Marty went into sedation due to seizures. She said, “They said he was having fevers of 101°F and higher. They were trying different medications for him to stop the seizures.”

On the 20th, Tracey said, “Marty was able to call me, but I could tell right away he wasn’t himself. He was extremely agitated and yelling and paranoid that the hospital had stolen his cell phone (he had called me from it).”

On Saturday, the 21st, Marty was transferred to intensive care in a coma. Tracey said, “I spoke to the neurologists just hoping he would get better.

”I think they re-tested him for COVID when they moved him. I think they assumed he had it then and was treating it as that.”

Tracey said, “He went downhill so quickly. They did a lumbar test to see if he had an infection in his brain. That came back positive for meningitis. I knew then, he was not coming home.”

She was afraid that “he was not going to be the same if he did get well” and perhaps would require skilled nursing care. “I knew he would not want that at all.”

Tracey, a woman of deep faith, frantically “kept praying for healing and total recovery,” hoping against hope that he would get well. She says, “The next week went by so fast for me, or slowly–I can’t really remember.”

The hospital called Tracey before they intubated Marty and asked about his end of life documents.

“Marty’s filing system left a lot to be desired,” she said, adding that she and friends ransacked his files for an end-of-life document. Nothing was found.

After much prayer, Tracey made the difficult decision to take Marty off life support on March 31st. Tracey and a close friend were allowed to visit Marty for the first time in 12 days. This visit was very different then the last time she had seen her husband.

“They had both of us cover up with gowns, gloves, two face masks and they bagged his belongings twice in bags,” she said. “They told us that when we got home to shower and wash our clothes.”

Over the phone Marty and Tracey’s pastor, the Rev. Robert Fleming at Love Metropolitan Community Church, was able to pray over Marty before he died. Tracey said, “When I touched him, he was already cold to the touch.”

“I went home and showered and cried,” Tracey said. Her husband of 30 years was gone. She said she felt so alone with just the couple’s two dogs, Glory and Ginger, to comfort her.

She said that the same day the hospital informed her that Marty had been diagnosed with COVID-19. She does not know if he was ill with the virus when he was first admitted to the hospital or if he contracted the infection while there.

The Rev. Jamie Lee Sprague-Ballou, pastor of Affirming God’s People United Church of Christ and organizer of Las Vegas TransPride, said Marty Brown was a quiet but important voice for the trans community.

Sprague-Ballou said, “When we opened up Out of the Gender Box in 2016, our transgender community drop-in center, Marty and Bobbie Miller were there every day to keep the doors open. Marty was the face of the drop-in center.” Marty was also active in the planning of the trans community’s annual Day of Remembrance on November 20 to draw attention to the continued violence endured by transgender people.

Sprague-Ballou said, “Marty transitioned early in life, in 1973 when he was around 18, long before being transgender was talked about or well known.” 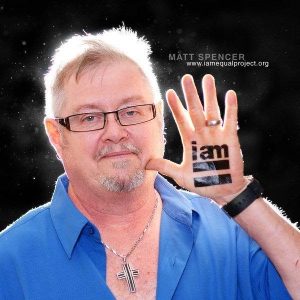 His wife, Tracey, says, “He started dressing as a male in college. He took drafting and welding in school, and a newspaper article came out with him in his welder gear, and although his name was not given, his mom saw the article and flipped out. He and his sister, Patty, were not on speaking terms either.”

Sprague-Ballou said, “Marty was very out and open about being a transgender man, but prior to first coming to Metropolitan Community Church in 1989, he was living more stealth.”

Tracey says, “When we met in 1989, Marty was an apprentice plumber through the local union. He could not come out as a trans male, and they took him at face value. He had a male-identified driver’s license. He knew it would be very dangerous for him to live authentically at his work.

“He worked as a Journeyman plumber through Local 525 and through the Clark County School District until his retirement in 2016.”

The Rev. Sprague-Ballou said, “Each person has to live their own journey. It can be easier for trans men to live stealth than trans women. But Marty felt the need for the trans community and we’re so grateful we had his voice. He was like a father figure for trans masculine folks.”

Tracey met Marty when be began to attend Metropolitan Community Church in 1989. “Yes, we met in church,” she says. “When Marty first came to church, I saw him and, like the song, ‘My heart went pop!’”

The Rev. Jamie Lee Sprague-Ballou shares that “Marty had changed the gender marker on his own birth certificate and got away with it for all those years. He gave his own birthright to himself.”

At the time only transgender persons who had undergone transition surgery were allowed to legally marry and then only to the opposite gender.

Tracey said, “The only surgery Marty had was chest reduction. So, for 20 plus years, until same-gender marriage was legalized, we always feared something would happen to him and our insurance would find out that he was not ‘male’ and things could go bad for us.”

As a cisgender lesbian woman, Tracey said she knew that Marty was trans when she first met him. She said, “It was never an issue of me being cisgender for him. I loved him no matter who he was. Our biggest issue was how he felt about his body.”

She said, “I would tell him over and over about how handsome or sexy he was to me, but it was a big deal for him. He actually never felt whole in his body because he didn’t have a penis or stand up to urinate or have sex with a woman. Nothing really worked as a substitute.”

Tracey said, “I remember he told me that he knew he was different by the age of three. He saw other boy children and wondered why he did not look like them. He had a fraternal twin sister, who was very feminine, and he was not. He saw himself as a boy and wanted to dress like that, but in the 50’s and 60’s girls wore dresses.

“After Marty and I got together, he and his family reconciled for the most part about his being transgender. His mom still called him by his dead name for a long time, but then relented to calling him Marty. His mom liked me and included me in Christmas gifts and birthdays.”

As part of his trans community activism, Marty worked with Ron Lawrence at the Community Counseling Center of Southern Nevada to help start a transgender support group. But Tracey said that all the other transgender persons in the group were female and “they wanted make-up and cosmetic and other help like that.”

Tracey said in the 90s there wasn’t much information available for trans persons, “If there was, it was more geared to drag performers or cross-dressers. She said, “If you remember, the Internet really didn’t exist then. I started a BBS (Dial-up bulletin board) and we met people that way.”

She said Marty found out about a magazine called FTM based out of Los Angeles. He met Jeff Shevlowitz, an organizer of an FTM group in Los Angeles and attended an FTM conference in San Francisco.

“That was a wild trip,” Tracey said. “We met over 20 different trans men and some partners, many of them were gay males. I did need to do some learning myself, I guess.”

She noticed that Marty at 6’1″ was taller than most trans men.
She says when the couple came back to Las Vegas, “We started attending a group at the Center called Trans.Lations, and really started to learn more of the trans community”

Tracey says, “We met Rev. Jamie and her husband Dave and that’s when Marty helped get the Out of the Gender Box drop in center started. Marty also worked with the trans psychologist, Jane Heenan, to help start Gender Justice. All this time, Tracey said, Marty was completely stealth at work, his co-workers “believed we were a married heterosexual couple.”

“Sleeping alone,” has been hard Tracey said. “Looking at his empty closet.” She is donating Marty’s clothing to the LGBT Center’s community clothing closet, SWITCH, providing free clothing for trans persons that matches their gender identity.

On April 9th, she totaled the family car. “I was distracted, I guess, ran a red light,” she said. “I wanted to go somewhere to scream and cry.”

When the other people involved in the accident came to help her out of her car, “The first thing I said was ‘My husband just died’ and they were looking for him in the car.” She said, “All I could think of was how angry he would be with me for crashing the car. I had no idea who to call if I couldn’t call him.”

“I belonged to a dachshund club,” Tracey said. “Every year they have a Halloween themed party, called Hallo-weiner. All the dogs would be dressed up in costumes and their owners as well.

She says, “Buddy, the dachshund was having a heck of a time in his costume. But Yoda, the chihuahua, didn’t want to be on the ground with all the other dogs. So, Marty put him in between his shirt and chest.”

Navigating sex in the era of Coronavirus

The truth about vaping — why it’s so harmful and why...