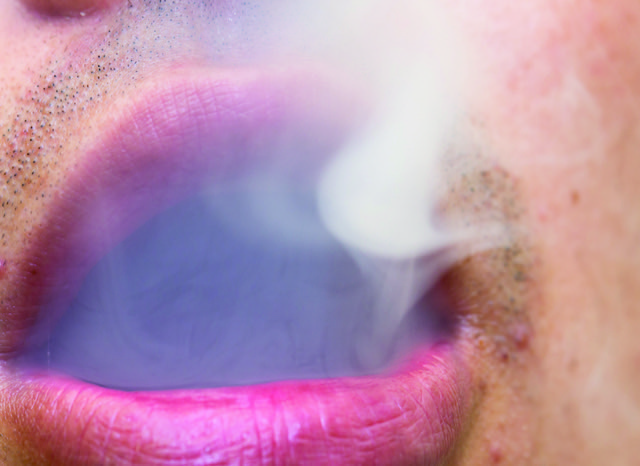 The LGBTQA+ community is at greater risk for COVID-19 infection for an entirely preventable reason — tobacco use, according to Malcolm Ahlo, a public health officer with the Southern Nevada Health District.

Tobacco use rates are disproportionately higher in the LGBTQA+ community than in the straight community, according to a report from the American Lung Association, “Smoking Out a Deadly Threat: Tobacco Use in the LGBT Community.”

“The CDC has stated that smoking and vaping lead to lung disease,” Ahlo said. “When the body is injured and comes under viral attack, it can lead to more severe disease.” With our higher-tobacco use rates that means our community is at higher risk.

According to Dr. John Maa, reporting for CNN, early observations from the pandemic in China show a possible link between smoking and COVD-19 disease. He wrote:

“One report, looking at 1,099 laboratory confirmed cases in China, revealed that 12.4% of smokers either died, required ICU admission or needed intubation, compared to 4.7% among never smokers. Another study found that among Chinese patients diagnosed with Covid-19 pneumonia, the odds of disease progression (including death) were an order of magnitude higher among smokers compared to non-smokers.”

Albert A. Rizzo, M.D., chief medical officer for the American Lung Association, said, “The CDC has identified smokers as a group of people at higher risk for severe illness if they contract” the coronavirus. He pointed to a recent study in the New England Journal of Medicine that “found people who smoke were 2.4 times more likely to have severe symptoms from COVID-19 compared to those who did not smoke.”

Smoking rates are down among adolescents, but vaping use is epidemic. In a teen focus group conducted by the Southern Nevada Health District, teens reported social stigma against those who used combustible tobacco, but widespread acceptance and use of electronic nicotine delivery systems (ENDS), such as Juul.

As a result, Maa reported for CNN:

“New York City Mayor Bill de Blasio highlighted a possible connection between the coronavirus and vaping after noting a healthy 22-year-old New York City man, whose only risk factor appeared to be a history of vaping, was hospitalized for Covid-19. The CDC has reported that up to 20% of patients hospitalized for Covid-19 in the US are between ages 20 and 44, and California Gov. Gavin Newsom noted that half of the Covid-19 cases in California are in younger adults aged 18 to 49.”

He added that the National Institute on Drug Abuse has included vapers on the list of groups who could be most impacted by COVID-19.

Maa said though the majority of cases of vaping product use with associated lung infection (EVALI) were connected to vaping of marijuana/THC contaminated with vitamin E acetate, 14 percent of the EVALI patients “exclusively used nicotine-containing products.” Ruling out that contamination of street vaping products is the sole cause of illness.

Maa wrote, “Perhaps some of the mysterious EVALI cases from the winter of 2019 should now be re-analyzed, to determine if the coronavirus may have played a role.”

“It is more important than ever to quit now,” Ahlo said. “You can’t negatively impact the lungs at this time.”

During our down time many people are adopting healthier eating and physical activity habits, Ahlo said. “Now is a great time to quit tobacco,” he said.

There is help. Call the Nevada Tobacco Users Quitline at 1-800-QUIT-NOW for free phone quit counseling or check out the American Lung Association’s online Freedom From Smoking program at www.FFSOnline.org.

An Effective Response to the Coronavirus Requires COVID-19 Data from LGBTQ+...