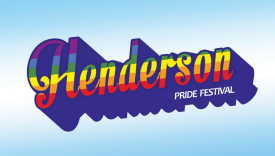 In 2017, The Advocate magazine listed the queerest cities in America and, surprisingly, Henderson, Nevada, ranked No. 14. That same year, a Gallup Poll listed Nevada as ninth in U.S. states with the highest number of residents identifying as queer (4.8 percent compared to Vermont’s leading 5.3 percent identifying as queer).

With all these LGBTQ people in the state, and many of them (according to The Advocate), kicking it up in Henderson, the city can now boast its own pride festival.

The Inaugural Henderson Pride, co-sponsored by the city of Henderson and the new Henderson Pride Festival, will take place April 18 and 19 at Monte Lago Village at Lake Las Vegas, a high-end resort and residential community with a village walk, stores and water activities.

The event, aimed at celebrating diversity, self- awareness, family values, health and wellness, is designed to be a catalyst for community growth and to introduce the economic force of the LGBTQ community, Anthony Cortez, co-founder and executive director of Henderson Pride, said in a letter to potential sponsors and supporters.

Cortez said 100 percent of the event’s proceeds will be designated to the Henderson-based International Cultural Movement for Equality (ICME), a nonprofit founded in 2019 focused on LGBTQ rights.

A ribbon cutting for the inaugural event, featuring entertainment, vendors and other activities, will be April 18 at 10:30 a.m.