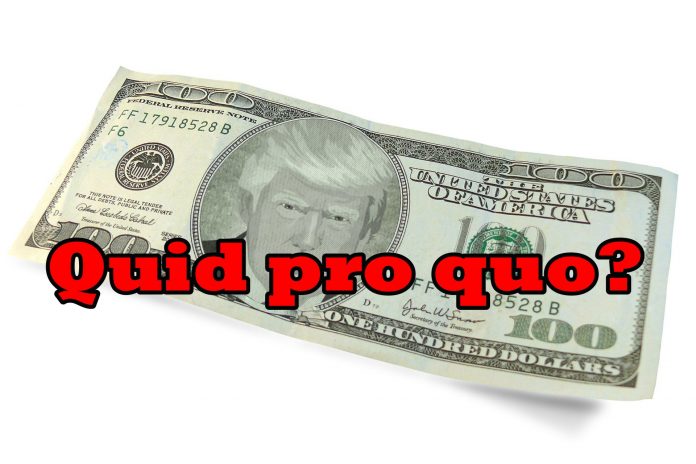 Do all things Donald Trump have to be so confusing? All we’ve heard the past month-and-a-half, has been “quid pro quo,” and it’s not exactly a term we use in everyday life. Most of us had never used the term, “quid pro quo,” until the Donald came along. Can’t we just say “bribery?”

We can understand using the term “quid pro quo” when there is little evidence. In this case, we have numerous witnesses and what is sometimes referred to as a transcription of the phone call between Trump and the Ukraine president.

A bribe is the gift of money (or other inducement) to get someone to act in one’s favor, typically illegally or dishonestly.

While there is a faint, legal distinction between “bribe” and “quid pro quo,” we may as well call this a bribe, and at least then the average person will know what Trump is being accused of.

We make no bones about it. We love and appreciate what The LGBTQ Center has done for Las Vegas and we want to see this as a successful project.

At the recent Honorarium, benefiting The Center, Joe Oddo The Center’s board chairman, explained that while the $5,000 and $10,000 donations are appreciated, smaller donations could be equally as important.

Indeed, The Center raised about $90,000 at the Honorarium and that included ticket sales, auction items and donations.

During the Honorarium, pledges were made for multiple thousands of dollars. There were volunteer staff members who quickly swooped in and recorded those large donations. When it came time to ask for the smaller donations, there was a lapse in planning. It happens. Nothing ever goes perfectly, no matter how carefully we plan. No one thought to even ask for those $5, $10 and $20 per month donations. Other, one-time donations of $250 or $100 were volunteered but no one picked up the pledge cards for nearly 30 minutes. The ‘passion of the moment’ was gone and many of those $250 or $100 donors just gave up.

We understand mistakes. We know oversights happen. They will always happen. If these issues are resolved next year, something else will go wrong. That’s just life and we don’t fault anyone. We do have a solution.

The $5, $10 and $20 donations, done monthly, are far more important than the $5,000 contributors, simply because they are so few of the high dollar donors. The Center needs your support and here’s what to do:

—While we’re telling you about The Center, there are a couple big announcements we believe are on the horizon. Expect to hear really good news later in November. We would give you a hint, but we were sworn to secrecy. Watch your email or check LVSpectrum on Facebook. We’ll keep you posted.

Vegas Astrology: Who trusts you, Scorpio?; Take the risk, Sagittarius