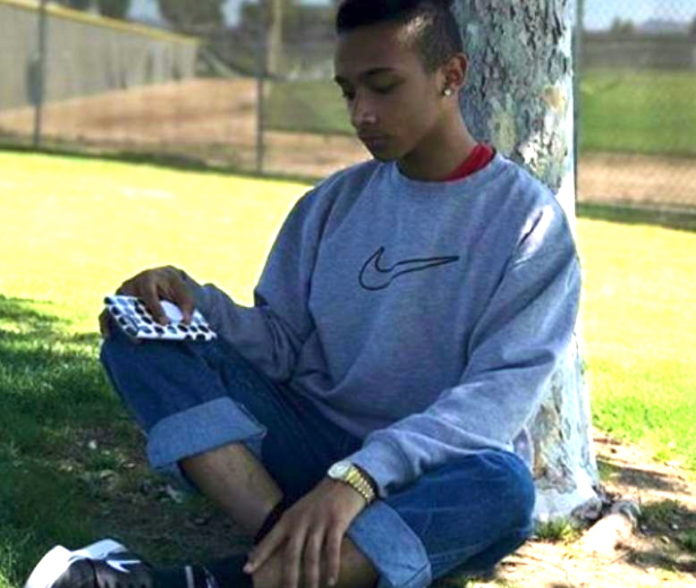 Tonight is pretty tough…sitting on the side of my bed staring into the ceiling and thinking of you, Giovanni. What would you have (been) doing today? You would have been on school break and getting ready for school. Instead baby, I am going to court tomorrow to see your father’s face. The monster that took your life.” — Veronica Melton, Facebook

It was a Thursday in early November, 2017 when Veronica Melton went online to check the grades of her 14-year old son, Giovanni. He was a student at Coronado High School, who was living with his father in a Henderson apartment in Seven Hills.

When she noticed that her son had skipped his first two classes that day, she decided she’d go pick him up and take him to school. Her broken ankle had finally healed, and it was the first day she’d be able to drive on her own.

But then she paused and thought, “Maybe, Giovanni’s father had taken him to a doctor appointment.” She decided to wait.

What she didn’t know is that somebody else was checking on Giovanni that day. Her ex-husband, Wendell Melton, arrived at the apartment to confront the son about his truancy. The son was reportedly at home smoking marijuana. An argument ensued and, as usual, the neighbors called the police.

When police officers and the coroner arrived at Veronica Melton’s home that afternoon, they told her to sit down. Her thoughts collected in her head — maybe, her son had run away, or maybe he was caught shoplifting. But this was much worse. By the time the police had arrived to break up the domestic disturbance between Giovanni and his father, the place was quiet. Wendell Melton had allegedly shot his son in the chest.

Veronica Melton immediately told the police that they were mistaken. She showed them a photo of Giovanni and stressed, “You must have the wrong house, the wrong person.”

This could not have been her precious son, the loving child who would tell her, “I’m always here for you, mom,” she said.

“He was sunshine. He’d walk in the door, light up the room, always making jokes. He was a happy baby.

“A very beautiful little boy and a good loving child.”

On Nov. 2, Wendell Melton was charged with the murder of his son, child abuse and illegal possession of a firearm. After spending time in jail, he was released on $200,000 bail with additional home monitoring.

That wasn’t enough for Veronica Melton and friends of Giovanni, who wondered why there was no charge of a hate crime. Giovanni had come out to his family that August and he had a boyfriend. The father was angry about it, hostile and often chastising toward the son he once babied, Veronica Melton said. “He was trying to play the Disneyland dad ever since they were kids. Spoiling them. But there was a 180-degree turn when Giovanni came out.”

The tensions were so bad that Giovanni’s former foster mom said to the local media that Wendell Melton “hated the fact that his son was gay,” and “would rather have a dead son than a gay son.” That comment was incorrectly attributed to the father, but the sentiment was agreed on by those who knew Wendell Melton. He’d been violent to Giovanni’s mother, who in turn pressed charges against him for domestic battery; separated from him in 2004; and divorced him in 2006. Her sons, Giovanni and Alex, lived with her, but in November 2015 she began having problems with the older son, Alex, who will be 21 this year, and sent him to live with his father. The boys didn’t want to be separated, and so Giovanni moved to his father’s home to be with his brother, Veronica Melton said.

She raised her sons in The Church of Jesus Christ the Latter-day Saints. Giovanni had been popular. He took karate as a child, took dance, led a stretching class and was social. When he came out to her as gay in mid-August 2017, they were at a restaurant and Giovanni’s boyfriend was there. Veronica Melton said she already knew. “A mother always knows their children. I knew in my heart that he was gay.” She said she didn’t care that he was gay. Because of society and safety, it wasn’t the lifestyle she wanted for him, particularly because he was already a person of color, and “so many people do horrible things to people of color,” but this was her son. She loved him.

Giovanni had told his mother that his father was having problems with his current wife and that’s why they were living in the Seven Hills apartment. There was no reason to question this. Veronica Melton had been to the apartment a handful of times. Wendell Melton’s clothes were hung in the closet. His shoes were on the floor. Giovanni was sleeping on an inflatable bed in his room, so she bought him a regular bed. The phone his father gave him would only connect in the apartment. She bought him a phone. It turned out that Giovanni was in the apartment because he and his father’s wife did not get along. Veronica Melton said she had no idea that her son was living alone: “They were both in on it. My son enjoyed living by himself. But that’s illegal. That’s child neglect, right there. You can’t have an underage child living alone.”

Wendell Melton’s defense is that the shooting was an accident. He originally spent time behind bars but was released on $200,000 bail, in the spring of 2018. The case was reassigned from Clark County District Judge Eric Johnson to Judge Michelle Leavitt on July 2, 2018, according to public records.

Veronica Melton has not spoken to her ex-husband and said that he is at home with his wife, rather than waiting for trial behind bars.

She’s upset that this was not charged as a hate crime and said the bail, originally set at $800,000, was dropped to $200,000. The reporter was not able to confirm this as of deadline.

Her Facebook posts on a page that she created in her son’s name after he was murdered, attests to all of this. A mother mourning. A justice system turning slowly. It’s been nearly two years since her son has been murdered and finally this July, the trial was set for next May. As to why Wendell Melton was not charged with a hate crime, the Clark County District Attorney’s office (responding by email) said, “This case was thoroughly investigated by law enforcement before being submitted to our office for prosecution. At this stage, we would not be able to meet the high burden of ‘proof beyond a reasonable doubt’ in order to charge a hate crime. Nevertheless, the crimes Mr. Melton are charged with are very serious felonies, including murder with the use of a deadly weapon.”

Still, outcry from LGBTQIA+ members has been loud. The Stonewall Democrats and others immediately rallied around the mother.

The Rev. Jamie Lee Sprague-Ballou, pastor of Mary Magdalene and Friends church, which holds its services at Metropolitan Community Church, is advocating at Veronica Melton’s side.

“For two years it has been (a) continuance, bumping it out, bumping it out,” Sprague-Ballou said. “How does a murderer get to sit in the comfort of his home with his wife? What kind of justice is this?”

Veronica Melton has been attending the Mary Magdalene Friends (UCC church), despite the overwhelming support from her LDS church.

She struggles to attend the LDS church because all the children Giovanni grew up are still there, going on with their lives.

Living has been equally difficult for Alex, who she said told her, “Mom, I have to admit, there were times I wanted to kill myself because of the pain.” She said that was “so hard for me because I could have lost both of them.”

The community and her fiancé have been so supportive, she said. But nothing seems to make sense anymore

Drag Queen Storytime, Guy Branum and other Pride events at...