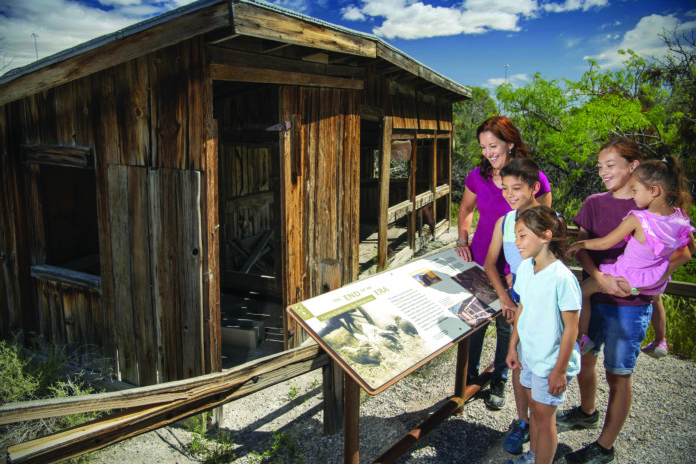 Summer break is in full swing for valley schools, and while Las Vegas may be best known as the ultimate adult playground, our fair city is also home to some of the best family-friendly activities in the nation.

Embrace your sense of adventure at our local recreational areas and preserves. Discover something new at one of the many museums you can only find in Las Vegas. Or, cheer for the home team with any one of our professional sports franchises playing during the summer months.

There are several annual pass options available ranging from the $45 Lake Mead Annual Pass to the America the Beautiful Pass at $80 (which includes access to more than 2,000 federal recreation sites).

A pass covers entrance, standard amenity fees and day-use fees for a driver and all passengers in a personal vehicle at per vehicle fee areas (or up to four adults at sites that charge per person). Children age 15 or younger are admitted free. There are nine main access points to Lake Mead National Recreation Area, and the Lake Mead Visitor Center is off U.S. Highway 93, four miles southeast of Boulder City.


The Nature Center is open 9 a.m. to 4 p.m. There is no fee. Springs Preserve 333 S Valley View Blvd., 702-822-7700, springspreserve.org
Located in the heart of the city, the Springs Preserve is an 180-acre cultural institution designed to commemorate Las Vegas history and provide a vision for a sustainable future. The preserve features museums, galleries, outdoor events, a botanical garden and an interpretive trail system that winds through a scenic wetland habitat. Listed on the National Register of Historic Places since 1978, the Springs Preserve is approximately three miles west of downtown. It is known as the birthplace of Las Vegas and represents one of the richest and most unique cultural and biological resources in Southern Nevada. As the site’s owner and steward, the Las Vegas Valley Water District works with the Springs Preserve Foundation to protect the area and create a community gathering place. Tickets range from $4.95-$9.95 for Nevada residents (with discounted rates offered for children, seniors, students and military). Visitor rates are slightly higher.

DISCOVERY Children’s Museum 360 Promenade Place, 702-382-3445, discoverykidslv.org
Opening in March of 2013, DISCOVERY Children’s Museum is adjacent to The Smith Center in Symphony Park. It helped redefine Las Vegas as a city that values culture and the arts, an urban lifestyle and, most importantly, its children. The 58,000-square-foot, three story building is home to nine themed exhibition halls with 26,000 square feet of interactive hands-on core exhibits. The 5,000-square-foot Featured Exhibitions Gallery is large enough to accommodate major exhibits from the nation’s leading museums. Tickets range from $12.95 (for Nevada residents with a valid ID) to $14.50 (general admission). A variety of annual memberships are also available.

National Atomic Testing Museum 755 E Flamingo Road, 702-794-5151, nationalatomictestingmuseum.org
The National Atomic Testing Museum (NATM) is a national, science, history and educational institution that tells the story of America’s nuclear weapons testing program at the Nevada Test Site. A Smithsonian-affiliated museum, it is one of a handful of private national museums and showcases some of the rarest of artifacts relating to the nation’s atomic testing program. From Atomic Age culture to the scientific and technological advances, the museum highlights 70 years of nuclear testing. The end of the Cold War is depicted through a piece of the Berlin Wall complete with the celebratory graffiti painted by Berliners when the wall came down.

Las Vegas Aces Mandalay Bay Events Center, 3950 S Las Vegas Blvd., 702-692-2237, aces.wnba.com.
With the Vegas Valley well on its way to becoming a bonafide sports mecca, the Las Vegas Aces have become one of the hottest tickets in town. The WNBA franchise, which is owned by MGM Resorts International, has the best defense in the league (2019) and leading the West Division in defensive efficiency, opponent field goal percentage, adjusted opponent field goal percentage and defensive rebound percentage.

The likes of Boyz II Men and Jabbawockeez provide pre-game and half-time entertainment, and don’t be surprised to find yourself rubbing elbows with Kobe or Lebron catching a game at the Mandalay Bay Event Center (AKA the House). Tickets are available starting at $20 and season ticket holders enjoy special member events throughout the year.

Las Vegas Lights FC Cashman Field, 850 Las Vegas Blvd.North, 702-728-4625, lasvegaslightsfc.com
Founded by Las Vegas resident Brett Lashbrook and his family, Las Vegas Lights Football Club was formed with the goal of bringing pro soccer to Southern Nevada. Lashbrook’s ties to professional soccer in this country run deep, having served numerous roles within the business operations of the sport across numerous markets. The franchise ups the ante on the fan favorite $1 beer night promotion by proclaiming all upcoming Lights FC home matches at Cashman Field during the summer months will feature $2 tequila shots at all stadium bars. Born out of a social media exchange, when Lights FC manager Eric Wynalda commented online that USL Western Conference rival Phoenix Rising FC’s recent winning streak for hosting dollar beer nights wasn’t really his thing. He was quoted via USLChampionship.com as saying “I think what we need to do is $2 Tequila Night, so that might be something we run up the flagpole, see if it works. I’m a tequila fan!” Looks like it worked. Viva tequila!

The name change completed a rebrand that included the opening of the Las Vegas Ballpark.

The stadium has already garnered national attention and was voted the 2019 MiLB Triple-A Best of Ballparks by fans and insiders.

Over 85,000 fans voted in all five rounds of the Triple-A Best of the Ballparks fan vote, with almost 500,000 fans voting to date in the overall competition. After several close votes in previous rounds, the final vote resulted in Las Vegas Ballpark with a 55.6 percent to 44.4 percent margin win over the El Paso Chihuahuas.