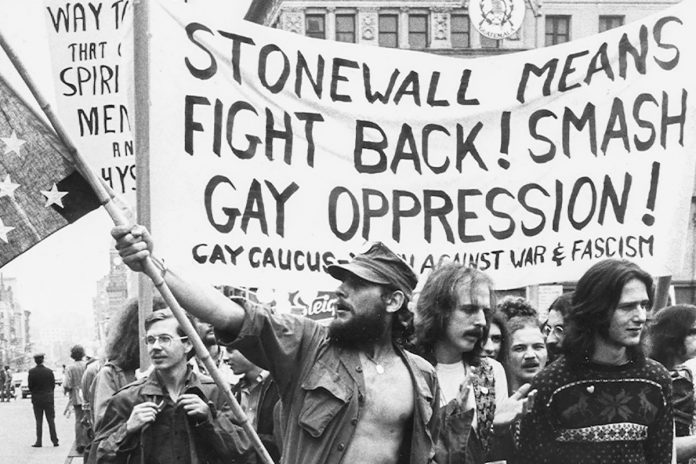 In the early hours of June 28, 1969, police raided a mafia-owned-and-operated, rundown, ramshackle gay bar on Christopher Street in the West Village, an area known to be frequented by gays, lesbians, prostitutes, street kids and drag queens.

About 200 people were in the bar, which had not been tipped off, per usual. The lights came on, the music shut off and customers who bolted for the door were blocked by police, who were lining up patrons to check IDs, and taking some people into another room to check their gender by examining genitalia, accounts reported. The delayed arrival of the paddywagons, left them all waiting in the bar together. Tensions rose when those lined up refused to hand over their IDs. Lesbians were reportedly arguing with the police, who were harassing them. Those who were released from the bar found a growing crowd outside, which would eventually be in the hundreds. Fists were raised. Bricks were thrown. The crowd was fighting back and held police captive in the bar, which caught on fire during the conflict.

Rioting continued for several days outside of the Stonewall Inn and the conflict eventually became cemented as a national clarion call to the disparate gay community or, the more gayish, “The hairpin drop heard around the world.”

Raids and police brutality were commonplace at the time. Life was risky for anyone being caught gay in the conservative 1950s, which were clamping down on homosexuality and crossdressers.

Homosexuality itself was officially a mental illness, illegal and highly taboo. Electroshock aversion therapy was used as an attempt to cure the illness causing same-sex love. The FBI kept lists of known homosexuals and police were a constant threat. In the 1960s when American youths were basking in the free love movement, gay men and lesbians were living under constant threat, jailed, blackmailed, beaten.

Openly banned from straight bars, the marginalized homosexuals were sitting ducks at these taverns, the only place they could congregate. Being gay meant losing everything: your job, your family, maybe even your life.

But that night, something switched.

There had been prior riots and uprisings, for sure – in New York, San Francisco and Los Angeles. There had been creative protests, sit-ins and happenings, polite protests outside government buildings. Gay organizations were already active and fighting for rights.

But Stonewall became that historic marker in which the conversation of gay history would be divided by “pre-stonewall” and “post-stonewall.”

On the one-year anniversary of Stonewall, the first Gay Pride Parade was held in New York and two other cities. The next year, parades were happening in even more cities. The movement was afoot. Gay organizations and activists were mobilizing and would soon be lobbying.

As for the riot, there is little footage of the event, save for a few photos. There was no filming or recordings. Accounts came from participants and witnesses who were there during the chaos differ. Lesbian activist Storm DeLarverie has been recorded, written about and celebrated as the one who sparked the Stonewall Riot. Marsha P. Johnson, an African-American activist and drag queen is referred to adamantly as the hero who “threw the first brick.” Others insist it was a cis, gay white man.

The issue is so divisive that the director Roland Emmerich’s 2015 film, “Stonewall” received backlash and call for boycotts for whitewashing history before it was even released.

Journalist Mark Segal, the president of the National Gay Newspaper Guild and a longtime gay activist, was one of the street kids portrayed in the film. Eighteen years old at the time and present during the Stonewall Riots.

Segal said the movie got everything wrong. The movie, he wrote in his column, “is uninterested in any history that doesn’t revolve around its white, male, stereotypically attractive protagonist. It almost entirely leaves out the women who participated in the riots and helped create the Gay Liberation Front, which included youths, trans people, lesbian separatists and people from all other parts of the spectrum of our community.”

However it began shouldn’t matter, say some critics. The community, once disparate, disconnected from society, themselves and each other was finally united under one cause. Homophile activism was afoot, visible and ready to lobby.

This month, while the nation celebrates Stonewall’s 50th anniversary with parties, documentaries and commemorations, we talk with two Southern Nevada residents who were active and in New York during the Stonewall era.

As We See It: Legislators Let Us Down; Counties, Cities Must...