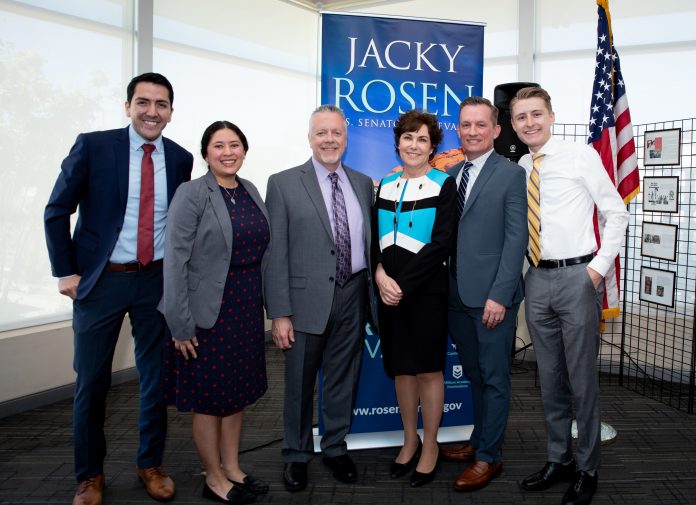 The proposed Equality Act got a shot in the arm April 23, when U.S. Sen. Jackie Rosen held a press conference at The Center.

John Waldron, The Center’s executive director, opened the presser by explaining over half of the country has no explicit statewide laws protecting LGBTQ Americans from discrimination in housing, employment and public accommodations.

“Nevada has those basic civil rights and in addition has become the 10th state to add gender neutral status to state driver’s licenses and IDs for transgender, non-binary and intersex residents. This step towards equality for trans and non-binary Nevadans should serve as a model for the rest of the country,” Waldron said.

The executive director pointed out that people across the country still face everyday discriminations.

“Same gender borrowers are 73 percent more likely to be denied mortgages, more than one in four transgender persons have lost jobs due to bias and more than three-quarters have experienced some form of workplace discrimination.”

Waldron went on to thank Senator Catherine Cortes Masto, the HRC and the ACLU for their support of the Equality Act, which has been introduced as a bill in both the House of Representatives and the Senate. 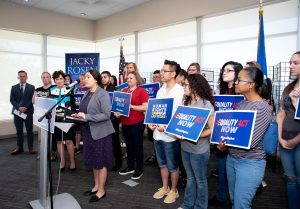 Briana Escamilla, Nevada State Director of the HRC, described the Equality Act as, “pivotal legislation that will provide clear, consistent protection across the nation in employment, housing, credit, education, public spaces and services, federally funded programs and jury service.” She thanked state legislators, such as former State Assemblyman Nelson Araujo, who was present and is now the statewide director for Sen. Jackie Rosen. She explained, if she were to drive across the country, her rights would change literally, dozens of times, as she crossed various state lines. 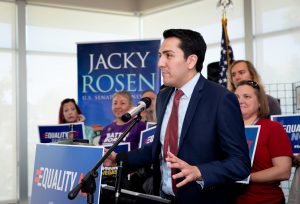 “We know that discrimination against members of the LGBTQ community continues to be a reality and we’re witnessing it every single day with this administration. From revoking discrimination protections against transgender children in public schools, to attempting to render the LGBTQ community invisible in the census. We know we must prevent this administration from doing even more harm and that means passing the Equality Act, which will help close the legal loopholes which allows that discrimination in the first place. I’m so proud to be a co-sponsor of this legislation which would explicitly prohibit discrimination, on the basis of sexual orientation and gender identity in education, employment, housing and beyond. I proudly supported the Equality Act in the House and am supporting this legislation in the Senate,”

Danielle Brown then shared her story about discrimination she faced while on a job interview. Speaking on behalf of HRC Las Vegas, she gave a quick shout out to Represent.Us Las Vegas.

“Since becoming transgender, or at least dressing full time, I’ve been bashed, ridiculed and even a family member threatened my life. By far the worst thing is people don’t take me seriously. No one gives me a chance.”

“I was on a job interview at a local liquor store. I all but had the job, Brown said. “The manager at one of the branches told me I had the job. All I had to do was go speak to the owners. One of the brothers who owned the chain of liquor stores gives me the basic interview. After we’re done, I hear his brother, the other owner, yell from the back, ‘No Caitlin Jenners here,’ so the interview was pretty much over there.

“People’s civil liberties are being denied,” Brown continued. “I’m fortunate to live in a state that has laws protecting us from discrimination based on sexual orientation and gender identity, but there are plenty of states that don’t, like our neighbors to the south, Arizona. “ 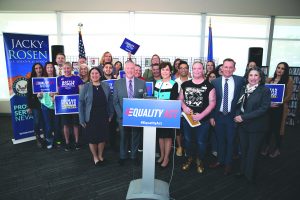 As LGBTQ people, all we want is to be treated with the same response as cisgender or straight people. We want work. We want to support ourselves legally. We want a safe work environment. We want a roof over our heads and not be denied housing just because of who we are.

“These aren’t difficult things for us to ask for. These civil rights should be in place across the board, in all 50 states. We need the Equality Act now.”

Tod Story, Executive Director of the ACLU of Nevada, closed by thanking Sen. Rosen for sponsoring the bill. He related a story that as a young gay man, he and his partner (Michael Ginsberg, whom he is now married to) tried to open a joint checking account, shortly after they first met. “We were told at the time by a teller, ‘Are you sure you want to do this? How long are you going to be in this relationship?’ Discrimination is real and it’s pervasive. Our rights should not depend on one’s location.

“Federal law does not provide consistent non-discrimination protection based on sexual orientation or gender identity. HR 5 and Senate Bill 788 seek to address the inequality of our present law. The ACLU of Nevada supports this law,” Story declared.

Voting is easy if prepared, no matter which way you approach...