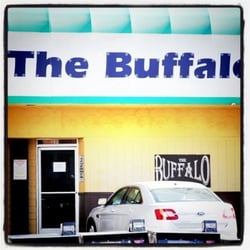 Thompson opened The Buffalo in 1980 on Paradise Rd., south of Tropicana and directly across from the then entrance to McCarran Airport.

The Buffalo became the first Levi/leather bar in Nevada. It soon became a popular spot and was the birthplace of the Satyricon Motorcycle Club. The Buff alo quickly became well known and a favorite among both tourists and locals. Several organizations that served the gay community got their start at The Buff alo and with fi nancial support from its owner.

It was at the new Paradise location that Howard started his “World Famous Beer Bust” which became a Sunday staple in Las Vegas. Thompson was one of the fi st bar owners to add video and the first to have a VJ.

Thompson allowed The Buffalo to be used for many, many fundraisers. Several organizations got their start at The Buffalo, including the Fun One Bowling League, the Desert Brotherhood Motorcycle Club, the Nevada AIDS Project, among others.

Over the years Thompson obtained his own gaming license, which allowed him to own his own machines (rather than lease the space to a slot route operator). The Buffalo went through two expansions, each time adding an additional 1,000 sf. The Buffalo featured a painting of a white buffalo, which he explained had come to him in a dream one night. “He was a very complex man,” said a former bar manager Wes Davis. “He had many facets that some will never know, and I always counted him as a friend.”

“Howard was a founding member of the Satyricons Motorcycle club,” Davis explained. “No one who ever saw one of the “Hell on Heels” shows the club did for our in town runs will ever forget his many renditions of Kate Smith singing God Bless America.” “Howard was the first bar owner to provide health insurance for his employees at a time when HIV was just beginning to take its toll. Later he added a 401-K plan for his employees, something unheard of for a bar in those days. “Howard was often controversial and sometimes quite stubborn. Underneath he was a good man and did a lot to promote the Gay community,” Davis concluded.

Chuck Barber, a bartender who worked for Howard for over 18 years said, “Howard was the best boss I ever had. A pleasure to work for.”

With love to our big brother: Sisters honor Terry Wilsey

As We See It: Thanks, Steve Sisolak; and remembering one of our own

Russel Ford’s ‘depop’ is a mind-bending trip into intrigue, secrets and...