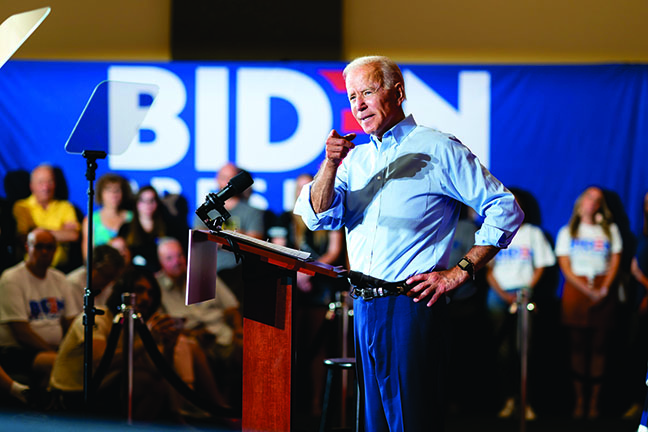 In challenging times, it can be easy to feel discouraged about our capacity to
make progress. Nearly 170,000 Americans have been lost to the pandemic,
and millions more have been infected. Others are worried about lingering health impacts of the virus and new pre-existing conditions like lung scarring that might result from infection. Jobs and small businesses have evaporated — and with them, the plans and dreams of countless Nevada families. At the same time, a national reckoning on racial justice has driven home just how far we still have to go to heal our oldest wounds.

There is no question that we’re facing a low moment right now. But if you ever find yourself doubting America’s ability to mend and grow, think about
the extraordinary march of the LGBTQ+ movement.

Eight years ago, I was asked on Meet the Press how I felt about marriage
equality, and gave an honest answer. My endorsement caused a bit of a stir. But just three years later, thanks to the resilience of advocates and the bravery of individuals, marriage equality was the law of the land — and it soon became an obvious right in the hearts of most Americans.

My answer on Meet the Press wasn’t an act of moral courage. Moral courage
is what activists showed on Christopher Street. It’s what transgender people of color exhibit daily as they endure a heartbreaking epidemic of targeted violence. It’s what State Sen. David Parks displayed when he was the only out Nevada legislator fighting a lonely battle for equality. It’s what countless Americans summon in living rooms and at kitchen tables, each time they make the choice to live their truth. That is the courage that moves hearts and nations.

For three-and-a-half years, Donald Trump has attacked the dignity of
LGBTQ+ Americans. Working to deny them access to critical health care.
Denying transgender people the opportunity to serve our country. Enabling
adoption agencies and homeless shelters to engage in discrimination. Turning a blind eye to violence — and giving safe harbor to voices of hate.

You deserve more from your White House than oppression and fear — you
deserve a partner who will fight for you.

These issues run deep for my family. My son, Beau, made incredible progress helping protect LGBTQ+ children, who were survivors of abuse, and as Delaware’s Attorney General he championed the state’s first transgender rights law. After Beau passed, I made it my mission to further that legacy, launching the “As You Are” campaign to raise awareness about how critical family acceptance is in the lives of LGBTQ+ youth.

As president, my LGBTQ+ agenda won’t merely reverse Donald Trump’s
indignities — we will codify the courage and resilience of this movement into
enduring law. That starts by passing the Equality Act, to lock in critical protections for LGBTQ+ individuals in our housing, education, public services, and lending systems. We will engage in a comprehensive effort to advance racial equity in every area of American life — recognizing the disproportionate burden that systemic racism inflicts on LGBTQ+ people of color. We will take on youth homelessness and the crisis of violence directed at transgender women of color. And we will protect LGBTQ+ immigrants and asylum seekers from discrimination.

None of the work ahead will be easy. But I’ve seen firsthand the incredible
capacity of the LGBTQ+ movement to win impossible battles — and soften
impenetrable hearts. As we build our nation back better, we are going to make unprecedented progress on the issues that matter most to the dignity, equality, and future of LGBTQ+ Nevadans and Americans.

Vice President Joe Biden is the Democratic candidate for the 2020 U.S. presidential election.

Sen. Pat Spearman explains why ‘it’s all on the line this...