Bill was a good friend, a fantastic editor and collector of all things cooking- or dining-related.

Prior to becoming managing editor of the Bugle, Bill was cage manager at both the Castaways Hotel and Silver Slipper Casino.

The photo with this announcement is one of the few available. Bill was in Carson City, NV and had just introduced former First Lady Dawn Gibbons to a group of activists who were on hand to celebrate the passage of Nevada’s Domestic Partnership legislation. Dawn’s ex-husband and then Governor had vowed to veto the legislation but it was passed with a veto-proof majority. Bill talked Dawn into publicly stating her support, just before the final vote. 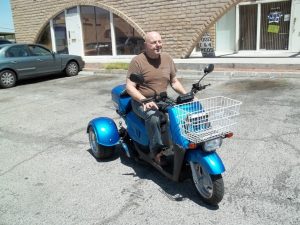 The photo directly above, courtesy of Dennis McBride, shows Bill on a scooter he once owned, sitting in front of the former Night Beat office on Almond Tree Ln.

Bill is a graduate of UNLV and happened to be editor of the Rebel Yell, the same year that former Congresswoman Shelley Berkley was student body president.

Bill actively supported St. Therese Center HIV Outreach and the Sin Sity Sisters, and was a founding member of the Imperial Royal Sovereign Court of the Desert Empire, Inc.