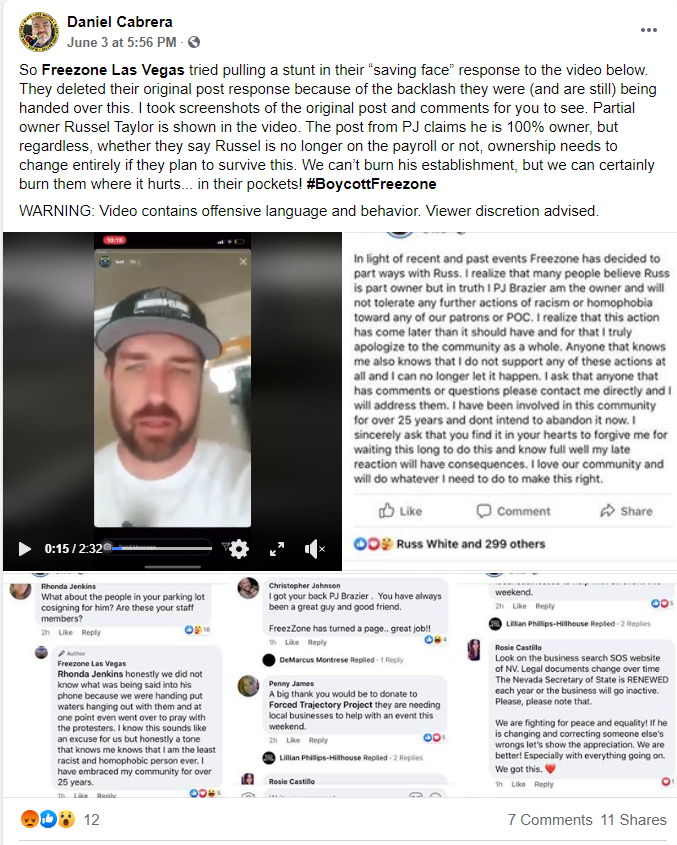 Russ Taylor, in a homophobic, racist and sexist video rant, may have drawn the attention of the Nevada Gaming Control Board for his alleged hidden ownership of the FreeZone, a nightclub that caters to the LGBTQ+ community

Paul Curtin (P.J.) Brazier, who is the sole owner of record on the gaming license, contradicts Taylor’s ownership claim and in a Facebook post, apologizes “to everyone who was hurt/offended by the video that has gone viral,” adding, “I have taken immediate action after being informed of the video and so my former associate Russ is no longer affiliated…”

Despite the apology and despite saying Taylor is no longer affiliated with the FreeZone, there are reports on Facebook that Taylor is still working at the club.

Taylor’s Instragam Stories video was created before and during a June 2, Black Lives Matter protest march, which started on Naples Drive, near UNLV, in front of the FreeZone. The video was screen shot and has been reposted to numerous pages on Facebook. In the video series, Taylor starts his rant in his garage and then appears at the club and in its parking lot.

Editor’s note: We apologize for the vulgar language, but have opted to quote parts of the video verbatim.

Taylor vows to defend his business, saying: “BLM is deciding to have a protest or riot, whatever you want to say, at my fucking business, my actual business parking lot is these cocksuckers’ fucking meet-up spot. I don’t understand how out of everywhere in the whole fucking world, they decide my fucking business is the parking lot they want to meet up at. What the fuck is that?

“But I’ll tell you right now, ain’t a thing that’s going to get looted in my fucking place. I’m that fucking Korean on the roof. You’ll see. This might be the last fucking update you’ll see from me, but I’ll tell you right now there’s not going to be any goddamn looting at my fucking business because obviously these fucking cops ain’t going to do a goddamn thing. We all fucking know that already. So, we gotta do shit our fucking self.”

He then moves to the parking lot, where he videos women walking down the street, commenting on their “booties,” saying he likes some and then calling others “dumpers.”

It is that video, which Brazier later apologizes for by posting a written comment and a long, apologetic video on the FreeZone Facebook page.

Taylor and Brazier have been lifelong friends, practically growing up together and working in the FreeZone bar since their early twenties. Russ Taylor’s mother, Kaye Taylor, is the former owner of the bar.

On the FreeZone Facebook page video, Brazier says: “In response to this video, which has went viral, I know a lot of you have questions and concerns about my stance on this issue. All I can say is for the people that know me, you know that is not me, 100 percent. I’ve been on this block since I was about 22 or 23 years old and grew up in this community.

“The last thing I want to see is division and racism and hatred toward any of the LGBTQ community or Black Lives Matter. I think the protest that has been going on right now is extremely important. I have been arguing this point on my personal Facebook page against many people that don’t seem to understand the gravity of the situation. I can only regret to say that this person had any affiliation with me, does not share the same values that I do or views that I do.

“It’s extremely important what’s going on right now. As to the other people who say I only did this because the video went viral, that’s not the case at all. This was actualy handled first thing this morning (June 3), I believe by 10 a.m. is when this individual was let go and told he had no affiliation with the club.

“The BLM movement is something I agree with. I wholeheartedly support. I can only say that was the straw that broke the back and that was what made me decide to do what I do and take a stand and make sure this doesn’t happen again. No matter what, he was in my employ. I am 100 percent owner of Free Zone LLC. That can be looked up. It has been misled for nine years.”

Brazier goes on to take 100 percent responsibility and says he agrees with the BLM movement.

In a June 13 Facebook post, Jesse Garcia write, “Wow, I was really surprised to see that FreeZone Las Vegas still has that racist and xenophobic motherfucker working…” In the same Facebook post, several other FreeZone clients express incredulity that Russ Taylor is still there. Gracia verifies, “Yes, I just saw him and he’s working.”

Kellyann Jaramillo writes, “He’ll never leave without a fight. When I saw the video, I genuinely thought he (Braizer) was done with him and then to hear he’s back just reminds me that it’s the same old cycle. Russ fucks up, PJ fixes it and then once it dies down, everything goes back to normal. Russ has always been a silent partner because he can’t have his name on any of the documents because he has a list of felonies…”

Jaramillo’s post has other allegations of sexual harassment, of Russ sending female employees “dick pictures,” and threats of losing jobs if “selfies” are not sent in return. There are more serious allegations against Russ Taylor on a Facebook page, FreeZoneExposed and also on #BoycottFreeZone.

The Las Vegas Spectrum was not able to verify these claims.

The  Nevada Gaming Commission has been known to take action against license holders who embarrass the state or sully the reputation of gaming in Nevada. Other license holders believe there will be little interest from the Gaming Commission or its enforcement arm, the Control Board, regarding the vulgar video, since despite Taylor’s claims, he does not appear to hold a gaming license.

The real issue for the Gaming Commission will be the alleged, hidden ownership. Taylor has claimed for years to own the FreeZone, and it’s repeatedly in the video. Many customers believe Taylor to be a co-owner with Braizer. It’s a claim Brazier denies.

In a written statement to the Las Vegas Spectrum publisher, Brazier said, “I am 100 percent owner of Freezone and have all licenses. We had an agreement to keep him (Russ Taylor) on staff that has since been dissolved.

“I am on the way to making Freezone what I knew it always could be and looking forward to working with the community as well as others. We are doing a benefit for The Center next Sunday and maybe we could have a conversation then if you decide to drop by.”

Carolyn Berkman is a longtime friend of Brazier and customer of the FreeZone.

“I have been going to the FreeZone since Kaye Taylor opened it,” she said.

She said she has seen the Facebook posts and does not believe them.

“All I can say there is a lot of negative, hateful comments from people who have never even stepped foot in the door of the FreeZone,” Berkman said.

She attended high school with Braizer and said she has never known him to be “hateful or disrespectful” to anyone.

Berkman said she believes Russ Taylor has been fired and that he is not an owner.

“I know for a fact that PJ has been sole owner for eight years now,” she said. “I know he (Brazier) has fired him. Russ has nothing to do with the club whatsoever.”

Rob Schlegel, Las Vegas Spectrum publisher, related a phone conversation he had with Taylor on Aug. 4, 2019. The call was over an Aug. 3 dispute with a bar manager about a missing magazine rack.

“Another of our news racks had gone missing at the FreeZone and I had gone into the club early one evening to ask about it.

“The next morning, I got a call from Russ, telling me he had thrown my rack away. He also attempted to insult me, saying I was too old for his club, that he didn’t want anyone my age in his bar and that I was ‘86’ed.

“What I found most interesting was that he had heard my entire conversation with his bar manager, which he had recorded without my knowledge. Not only that, but he told me that he and his friends liked to sit at his house, drinking and listening to the conversations among customers at the bar. He was bragging about both the audio and video capabilities of FreeZone’s monitoring system. He informed me his fiends found the conversations of his gay clientele amusing and entertaining.

“Based on his statements about his ability to monitor and record every conversation in the club, all from his home, there is no question in my mind, that he is the owner, or at least partner, in the FreeZone,” Schlegel said.

“Since this quote will be in the Spectrum, I will voluntarily disclose that I hold an ownership interest in this publication.”

Copies of the original video by Russ Taylor, along with other comments and videos, can be seen at https://tinyurl.com/FreeZoneRuss

The apology from PJ Brazier can be viewed at https://tinyurl.com/FreeZonePJ

There are other videos, comments and even more serious allegations on Facebook. Most can be found by using the Facebook search tool and looking for FreezoneExposed, #BoycottFreeZone and #CloseFreeZone

“If these were simply allegations on Facebook or Instagram, we wouldn’t be running this story. The fact that there is video of both Russ Taylor and the subsequent apologies from PJ Brazier, makes this a news story and we would be irresponsible to not report it,” Schlegel said.

”There are allegations of sexual assault, by alleged victims, posted online, and we hope those accusers report these to the proper authorities, if they haven’t already.”