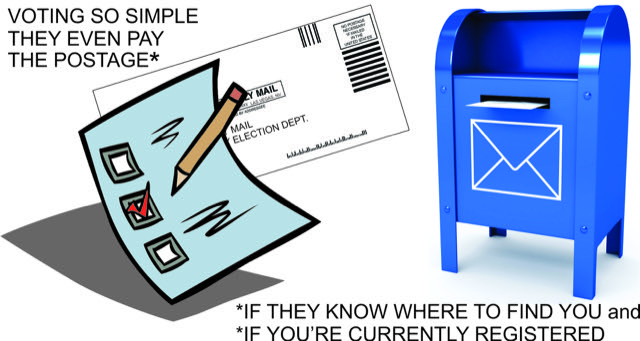 Special to the Las Vegas Spectrum

The flashpoint for the June 9 Nevada primary isn’t any particular race or ballot measure – that will come in November when President Donald Trump squares off against former Vice President Joe Biden. Instead, it’s a legal fight that will play out until the election is over, and will determine how Nevadans can vote.

In March, Secretary of State Barbara Cegavske announced a vote-by-mail system for the primary in the wake of COVID-19, a move that has come under fire by both liberal and conservative groups and organizations.

Progressive groups and the Nevada Democratic Party have challenged Cegavske for opening only one in-person voting location in each of the 17 counties for early voting and late registration.

There’s a concern a decision to automatically send ballots to active voters rather than to all of those who are registered will leave some people out of the process. Progressive groups also argue more than one in-person voting location should be open, especially for large locales like Clark County.

Cegavske said opening more polling places would create staffing problems and further risk spread of the virus. She added she has to follow state law in determing who she can send ballots.

A conservative group filed a federal lawsuit, saying Cegavske didn’t have the authority to go to an all-mail primary. The group said it’s concerned about fraud, even though other states have all-mail elections without any problems.

André C. Wade, the group’s state director, said the current plan may deny thousands of people the right to vote and would be “devastating for Nevada voters of color, LGBTQ+ voters and other eligible voters in traditionally disenfranchised communities.”

Wade said he feared voter rolls may not be reviewed for accuracy and some voters will not receive ballots. In addition, only having one-in person voting location means voters will gather in close proximity for hours in violation of COVID-19 social-distancing recommendations, he added.

“We want more than one voting center in counties so there aren’t thousands of people going to one place and increasing the spread of the virus,” Wade said. “We also want to open more in-person locations for people with disabilities and languages other than English and minority communities who tend to have a distrust for mailing options for voting.”

Mail voting can also leave out those who’ve been displaced by COVID-19 because their addresses have changed, Wade said.

Wade said the main focus of the group during the primary is dealing with COVID-19 and voting; not on any particular political race. That will be in November for the presidential election and on Question 2 that proposes to amend the Nevada Constitution to require the recognition of all marriages regardless of gender.

The primary covers races for the U.S. House, state Senate and Assembly, Clark County commissioner, justices of the Supreme Court, Court of Appeals judge, District Court judges, justices of the peace, state university regents and state Board of Education, the Clark County School District board and other positions.

“All elections are important but when you have a pandemic that you’re dealing with it’s important to encourage people to continue to get out to vote and feel safe in doing so,” Wade said of the primary. “For November, we’re hyper-focused on the presidential election because President (Donald) Trump has not been good to the LGBTQ+ community by rolling back protections and hasn’t been good for minority and immigrant communities.”

Rob Schlegel, publisher of the Las Vegas Spectrum, has edited an LGBTQ+ and progressive voter guide since 1996. That guide is available in this edition of the Spectrum, which is being mailed to nearly 10,000 same-gender households.

“We are the first LGBTQ magazine in the nation, and likely the first group in the nation to create a lesbian and gay data base, using names and addresses from marriage licenses.”

The Spectrum’s voter guide will be available on LasVegasSpectrum.com and also on its sister site, NevadaImpact.com

Will Pregman, director of communications for the progressive group Battle Born Progress, said his group also is  putting together a non-partisan voter guide in May with responses from all the candidates for various offices and topics that will be available at https://votesmartnv.org/.

In November, Pregman said Battle Born will be working on behalf of passage of Question 2 to add same-gender marriage to the state’s constitution even though it’s already legal statewide.

Voters can mark their ballot at home and return it by mail, using a postage-prepaid envelope, by Election Day or by dropping it off in-person at a designated county location by Election Day. If a voter fails to sign the ballot-return envelope or the voter’s signature does not match the one on file with the county, the voter will be contacted and have up to the seventh day after the election to make a correction.

Clark County Registrar of Voters Joe Gloria said by May 18, the county’s registered voters will receive a mail ballot packet and list of drop-off sites if they don’t want to submit it via mail.

“We are trying to limit them getting out and about and be safe at home and use the postage-paid envelope and send it back to us in the mail,” Gloria said.

Gloria said the in-person voting site will have social distancing and enough staffing and equipment to prevent long lines.

“Unless you’re not registered you should be receiving a ballot in the mail,” Gloria said. “By doing that, we’re avoiding what they did in other states and forcing people to go out and take a risk in being out in the general public like they did in Wisconsin.”

For additional information on registering after that point, go to https://www.clarkcountynv.gov/election/Documents/2020/Mailer-Notice-20P-EXPANDED.pdf.

For more information, contact the Clark County Election Department at 702-455-8683.

‘We are all in the fight for liberation’ : How today’s...