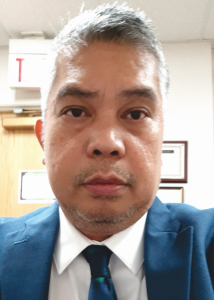 Rino Tenorio, an auditor with the Nevada Department of Taxation’s Marijuana Enforcement Division, said he was on jury duty Dec. 13, 2018, when he received a text from a colleague requesting a photo for an office calendar.

He texted an image of himself, heard nothing back and thought little of it.

The following Monday, Tenorio arrives back at work to find an email from the employee to whom he texted his photo.

She had superimposed his face onto a woman in a dress. The woman is a mariachi player. She has thick braids extending downward from her large white hat. She is posed with her legs crossed and is seated at a table. The face is Tenorio’s unsmiling gaze. “

What do you think of this one for Cinco de Mayo?” the email said along with the photo.

“Nope…not for it!!” Tenorio, a gay man in his 50s (and originally from the Philippines), responded.

Tenorio said he was offended, surprised and embarrassed by the image and the way it mocked him. He said he told his colleague that he thought it was highly inappropriate and could harm his reputation professionally.

But it didn’t end there. Tenorio then filed a sexual discrimination complaint, he said, hoping that it would draw attention to what is inappropriate behavior toward gay people in the office.

“Even though I’m gay, I don’t want to be portrayed like that,” he said, explaining that it could hurt his professional reputation and credibility because the photo, he said, had already been shared in the office and his job involves him meeting with the public.

“I told her, this is not the picture I sent for a calendar so what’s going on?”

According to Tenorio, the employee apologized and told him that the image was for a pinup calendar featuring different employees as a joke for Taxation Director Melanie Young’s birthday. He said she told him the calendar also featured other men in the office, who chose which female character they wanted to be.

Tenorio, on the other hand, said he knew nothing of the joke, only that he’d been asked for a photo of himself, which he had assumed was for a serious office calendar that featured employees.

“She never gave me the opportunity to agree and never asked my permission,” said Tenorio, who added that he hoped the complaint would either generate a general human resources memo reminding people of LGBTQ+ discrimination or even some type of sensitivity meeting.

This happened since Sisolak took office and issues his executive order. In mid January, Tenorio said he was notified the investigation into his complaint had been completed. The state has confirmed this with the Spectrum. Tenorio says when he inquired with Young, who had been appointed director that very month (January) by Gov. Sisolak about the results, he said the results were not explained to him, which the state personnel file says is up to the appointing authority.

Instead, on Jan. 19, 2019, just days after the complaint was finished, Young, who had been in the Department of Taxation since February 2018, opened an investigation into Tenorio that accuses him of unprofessional conduct. He said he is now facing accusations of bribery and other criminal conduct.

Dana Gentry with the Nevada Current first reported the story on Tenorio, which states: “Tenorio says he’s been unwittingly caught up in litigation filed by marijuana license applicants who are claiming the Department of Taxation, which regulates the marijuana industry, is either inept or corrupt.”

The Department of Taxation Marijuana Enforcement Division has been facing a series of lawsuits by unsuccessful licensing applicants. Accusations of bribery are swirling and Tenorio is in the thick of it.

“I’m facing an internal investigation for bribery, use of state equipment, “Tenorio said. “It all started from my complaint with the discrimination.”

Tenorio has provided Nevada Current and the Spectrum an image of what he said is the original email from the employee, named in the exchange as Karalin Cronkhite, as well as his initial response: “Nope…not for it!!”

Tenorio said that in his eight years working for the state, he had never been written up and had received only positive annual reviews.

When asked to confirm this, Stephanie Klapstein, spokesperson of the Nevada Department of Administration referred to (NAC 284.718(1)(j)(2) and stated, “Nevada Administrative Code does not allow us to share any information in the record of a current or former employee that relates to disciplinary action.”

“The employee’s agency handles employee actions, not the Division of Human Resource Management.”

Tenorio said he did contact Young in his agency for response, but received none and was instead experiencing retaliation from Young and others in the department. He said he was willing to accept the results but wanted to be confirmed if it was substantiated.

The rules for the State Personnel Administration state:

Additionally, according to the Statewide Sexual Harassment Policy, “The ultimate decision for remedial action is the responsibility of the appointing authority.

According to Tenorio, Young chose to not respond to him and did not address it in the office.

He is on leave from work and being threatened with criminal behavior as a whistleblower and is currently seeking an attorney.

The Spectrum will be following this story as it unfolds.

Take off your pants and slip on the red dress, the...

As We See It: Why you must vote early or caucus