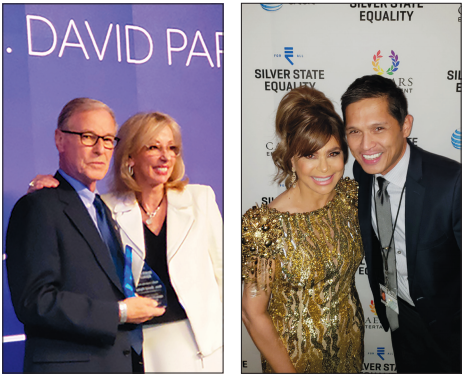 It seems appalling enough that Ben Carson, the secretary for Housing and Urban Development, described trans women as “big hairy men,” but it’s his other statement that lingered with equal weight, highlighting Carson’s truth: “Transgender people should get the same rights as everyone else, but they don’t get to change things for everybody else.”

The statements came when Carson, who has previously made anti-LGBTQ+ comments, was addressing the topic of trans women using women’s restrooms in shelters, stating his hypothetical trauma of women encountering “big hairy men” identifying as women. In response, U.S. Sen. Catherine Cortez Masto (D-Nev.) and 32 other Senate Democrats demanded the former brain surgeon (who has been called out previously for anti-LGBTQ+ comments.)

“If you are truly committed to recognizing the value of the people you are charged to serve as HUD secretary, you must publicly retract your statements about the rights of transgender individuals, support their basic rights to seek shelter consistent with their identity, and take no actions that undermine these rights,” the democrats wrote in a letter to the HUD secretary.

“We are deeply concerned that your comments undercut protections provided to transgender people under HUD’s rules, undermine basic respect for transgender individuals seeking housing assistance, and create an environment that further marginalizes this vulnerable population.”

Additionally, the democrats informed Carson of HUD’s mission: “These comments run counter to HUD’s mission to connect vulnerable people with essential housing and services they need to stay safe. It is clear that transgender individuals face bias and discrimination that endanger them and limit their basic access to shelter. In developing its 2016 Equal Access Rule, HUD found that transgender and gender nonconforming persons experience “significant violence, harassment, and discrimination in attempting to access programs, benefits, services, and accommodations.

HUD also reported that “transgender persons are often discriminatorily excluded from shelters or face dangerous conditions in the shelters that correspond to their sex assigned at birth.”

Some commentators on HUD’s rule reported that, if given the choice between a shelter designated for their sex assigned at birth or sleeping on the streets, many transgender individuals experiencing homelessness would choose to sleep on the street.”

Las Vegas PRIDE Outdoors held a hike on the Historic Railroad Trail in Boulder City on Nov. 10. More than a dozen people participated in the roughly 5-mile hike. The group assembled at 10 a.m. at the western trailhead and walked through the five tunnels to the east end. A couple of participants continued the mile to the Hoover Dam.

The Las Vegas Men’s Chorus (LVMC) has announced its annual December concert under the direction of Ryan Duff, Clark County School District educator and 2017 Heart of Education award recipient. The chorus will sing arrangements of traditional holiday music, including those popularized by movies, Broadway and other artists in a new show that will highlight festive and inspirational winter favorites.

As part of its mission, the chorus also will be supporting Project 150, a local charity that provides assistance to local homeless teenagers, by organizing a donation drop off for teen-appropriate hygiene products and other necessities.

The concert will be held 4 p.m., Dec. 22 at The Flamingo Library, 1401 E. Flamingo Road near South Maryland Parkway.

“The Las Vegas Men’s Chorus is always excited to produce its annual holiday production,” said Mike Winget, president of LVMC. “ ‘My Favorite Things’ is a wonderful and innovative show that showcases holiday favorites with cheer and goodwill. Through the warmth of holiday music, we will continue to focus awareness to help our local homeless teenagers, who need special assistance during the cold winter.”

The Las Vegas Men’s Chorus was established in the early 1990s by a small group of men looking to bring the choral sound of men’s voices to the Las Vegas community. It is a nonprofit ensemble whose members sing together with the purpose of creating musical experiences, providing cultural enrichment and promoting social acceptance for its members, community and audiences.

What began as an effort to collect socks and underclothes for homeless charities has grown into a not-for-profit organization with a street outreach program and a commitment to humanizing the homeless. And now, Caridad Gardens, working in partnership with Ferguson’s Downtown, unveiled in November a new jobs program for formerly homeless veterans re-entering the work force.

The hydroponic garden, housed in a shipping container will be maintained year-round, selling produce to local bars and restaurants, and providing employment for veterans as a way to help re-integrate them into the work force.

“Caridad Gardens is an innovative, sustainable, and creative way to build new job opportunities, give access to fresh produce to our food deserts, and share impactful resources for people experiencing homelessness. Kelly Bennett, marketing director with Ferguson’s Downtown, said. “As a city block rooted in community, Fergusons Downtown is excited to see this program make a real local impact and change the lives of many people.” For more information on Caridad Gardens, visit caridadchsarity.com

Pay your parking tickets with food

With so many seniors in need of food and meals, including during the holiday season, the city of Las Vegas is accepting food donations in lieu of monetary payments for parking tickets that were issued in Las Vegas between Oct. 16 and Nov. 16.

Those with non-public safety infractions may bring non-perishable food items that are equal or greater in cost to the fine. A receipt for the purchased items also must be provided. The items will be donated to Helping Hands of Vegas Valley, a nonprofit assisting low-income and disabled senior citizens, those, it says, are faced with “poverty, food insecurity, social isolation, loneliness and the need for other specialized support.”

Food items must be done within 30 days of the citation date and will be accepted through Dec. 16 at its Parking Services Offices, 500 S. Main St.

Cox Charities, the fundraising arm of Cox Communications, donated $25,000 to Helping Our Brothers and Sisters, and $25,000 to the Las Vegas Natural History Museum using proceeds from its Cox Charities Golf Tournament.

Helping Our Brothers and Sisters is a nonprofit organization that assists combat veterans, particularly those living with PTSD and other chronic issues, and provides guidance to LGBTQ veterans that have been denied recognition and benefits. It will use the donation to kickstart a language immersion program for combat veterans overcoming PTSD and traumatic brain injuries.

Parks was the first openly gay Nevada lawmaker. He was elected to the state Senate in 2008. He has fought for LGBTQ+ rights in Nevada for more than two decades, and is currently the dean of the LGBTQ Caucus.

Abdul is a LGBTQ+ icon and an outspoken advocate for the community. She has a residency at the Flamingo.

Healing Las Vegas,” a book about the Las Vegas Community Healing Garden, has been published by University of Nevada Press.

It features photos, quotes, memories, poems, inscriptions and tributes to survivors and victims of the Oct. 1, 2017, mass shooting in Las Vegas.

AIDS Memorial Quilt goes home to SF After 18 years in Atlanta, Georgia, the AIDS Memorial Quilt, now at 50,000 panels, is scheduled to travel to its permanent home in San Francisco’s National AIDS Memorial Grove. Its archives of more than 200,000 letters, photos and records, was gifted to the American Folklife Center at the Library of Congress. The quilt weighs more than 52 tons and requires the seven tractor trailer trucks to move it across country where it will be stored in a warehouse space until the project gets underway. For more information, go to aidsquilt.org.

Images recorded of an American family

In 1988, nurses, Steven Lofton and Roger Croteau were one of the first couples in the area to foster and care for unwanted and abandoned infants infected with HIV and AIDS.

The nurses had been working in an HIV/AIDs ward in a Miami area hospital in the 1980s and became close with a patient, who on her death bed asked if they would become the guardians of her son.

This was the beginning of what would ultimately become a large family: Four children, two dads. A friend photographed the family for “Ginger’s Book: An Aids Primer.” Images from the bilingual book (Spanish and English) were featured at the West Charleston Library this summer, with a closing reception in November. For more information, go to anamericanfamilylegacy.com.

The West Charleston Library will host an event to provide information on how immigrants can help their family members come to the United States. It will be held Dec. 5 at 5:30 p.m. at 6301 W. Charleston Blvd., 702-507-3964

Realtors to celebrate the season with a party and mixer

The Las Vegas chapter of NAGLREP, The National Association of Gay and Lesbian Real Estate Professionals, will hold its holiday mixer Dec. 10 from 4:30-7 p.m. The free event will be held at Pardee Homes’ Nova Ridge neighborhood in The Cliffs village in Summerlin South, 6600 Aurora View St. The mixer will provide free cocktails and appetizers.

Job fair to be held at W. Charleston library

The bitch is back!: Auntee Social says `welcome back to the...