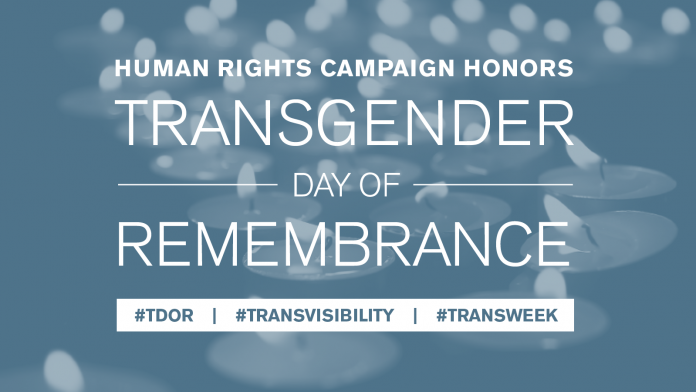 Transgender Day of Remembrance (TDOR) is a night to stop and remember the lives who were lost throughout the year due to transphobia. This event started after the death of Rita Hester, an African American, transgender individual, who was brutally murdered in Allston, Massachusetts, on Nov. 28, 1998.

The murder of Rita Hester sparked a web-based project called, “Remembering Our Dead” by Gwendolyn Ann Smith, and a candlelight vigil held on November 20, 1999, in San Francisco to honor Rita Hester and the lives lost throughout the year due to transphobia. To this day, the murder of Rita Hester remains unsolved, as is the case with many of the deaths that involve the transgender community.

Highlighting the loss of trans lives at TDOR is not to bring fear into the community, but to bring the community and our allies together, to send a message, that enough is enough. Trans Day of Remembrance is an opportunity to bring awareness and education to others surrounding the violence that exists against the transgender community, especially trans women of color.

This year, Las Vegas TransPride will display the Wall of Remembrance as part of our Day of Awareness, Thursday, Nov. 21 at UNLV in the Free Speech Zone on campus from 10 a.m. to 5 p.m. The following day will be the Trans Day of Remembrance Vigil, Friday Nov. 22 from 6 to 8 p.m. at The LGBTQ Center of Southern Nevada. Kamora Jones, who is a native Nevadan and volunteers her time as a facilitator for Gender Trans. lations, the main trans support group at the Center, Fridays at 5:30 p.m. will also speak at the vigil.

I am the founder of Las Vegas TransPride, and have been hosting the TDOR vigil in Las Vegas since 2006 after attending a small vigil on the campus of UNLV in 2003. In October, Las Vegas TransPride, The Center, and members of the trans community worked with the Las Vegas Pride committee to have TransPride at Pride, to promote inclusion and cohesiveness with the larger LGBTQIA community, and to bring the community together as a whole. It seemed to be a success for the whole community.

Las Vegas TransPride continues to work with individuals on a one-on-one basis, whether it is offering referrals to 40 transgender deaths this year, mostly trans women of color other local organizations, such as The Center, Community Counseling Center and Gender Justice Nevada, helping people with food needs, spiritual care or providing chest binders to individuals who are looking for binders.

Las Vegas TransPride will continue to host the Transgender Day of Remembrance as its foundational work here in Las Vegas. For years Las Vegas TransPride has done work within the community without charging individuals for the help they receive, and unfortunately the support was not always reciprocal which has forced us to slim back on services we can provide.

We are an organization that puts funding or resources back into the community, without anyone in our organization receiving a paycheck. Our goal was and still is to provide a community in which we support one another and not charge our community when we are a community that struggles the most in society.

This month in LGBTQAI history: Question 2 bans same-sex marriage in...