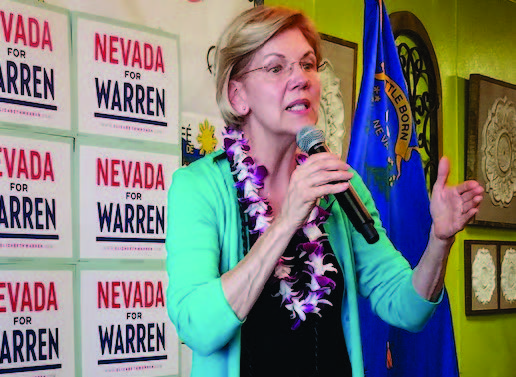 Our economy is suffering because of this administration’s incoherent trade war by tweet. The cost of raw materials is rising, American businesses are alarmed, and farmers are hurting. American consumers are paying the price, and the

odds of a recession are increasing. And in Nevada, escalating tensions with our trading partners are starting to hit Americans in the pocket. We need a new approach to our trade policy — one that isn’t haphazard and dangerous, but also one that doesn’t simply follow the old trade playbook of putting corporate interests over American families. Giving special access to our markets also means we can use that leverage to push our allies to put in place protections for workers and our environment — and uphold internationally recognized human rights. I will use every tool in the toolbox, including our trade policy, to ensure that America is a leader in the fight for LGBTQ+ rights all over the world. And I have a plan for that. For too long, Washington has let big, multinational corporations dictate trade rules. Deals are negotiated behind closed doors and rushed through Congress without much opportunity for input from the American public. This isn’t a coincidence. It’s a direct result of decades of trade negotiations structured to favor special interests at the expense of American workers. This approach is great for the wealthy and the well-connected, but it’s not working for American families. It has encouraged a global race to the bottom, depressing wages for American workers and damaging our environment, while shipping millions of jobs overseas in the process. I believe in markets — but markets without rules to make sure everyone has a chance to play on a level playing field is theft. The idea of free trade should also not be used as justification for trampling over indigenous people, the LGBTQ+ community, or migrant workers. That’s why we need to fundamentally transform our trade policy by leveraging access to our markets to give American workers the chance to compete fairly and to raise labor, environmental standards, and human rights worldwide. A new approach to trade can achieve that goal, but it must be comprehensive. My proposal overhauls our approach to trade policy in three key ways: by increasing the transparency of trade negotiations and putting American workers and consumers at the negotiating table; by using our leverage to push other countries to raise standards so American workers can compete on a level playing field; and by strengthening our enforcement of labor, environmental, and human rights standards worldwide.

First, we must dispel the mystery surrounding trade negotiations. That means bringing organized labor to the table and opening up deals to public scrutiny. I’ll start by not seeking expedited congressional approval of trade agreements unless every regional advisory committee and the labor, consumer, and rural advisory committees unanimously certify that the agreement serves their interests. I’ll ensure that trade advisory committees are comprised of consumers, environmental, and labor representatives, and expand the committees to include one for rural regions across the country. And I’ll direct negotiators to make agreement drafts open to public comment, like we do for other Department guidance and rules. With a transparent process, American workers can be accurately represented in our trade plans, not just corporate interests. Our trade agenda will level the playing field for American workers by setting standards trading partners must meet for any agreement. We will also use our leverage to raise the labor, environmental, and human rights standards of our trade-partner countries and eliminate incentives for multinational companies to produce their goods in countries with lax labor and environmental standards. And we will ensure that our trade agreements include provisions that protect worker pensions, promote equal pay for equal work, and prohibit violence against workers. I’m also committed to ensuring that America itself meets these standards. Last but not least, we need to reorient our approach to enforcement so that it drives global standards up, not down. That means upholding human rights for all workers, protecting potential trafficking and child labor victims, and making sure collective bargaining exists worldwide. Elevating environmental and labor standards won’t mean anything if a corporation can pick up and move to another country that doesn’t enforce them. That’s why I’m committed to eliminating Investor State Dispute Settlement (ISDS) provisions that have allowed multinational corporations to skip the courts and undermine countries’ environmental, human rights, public health, and labor protections. I’ll create independent commissions to monitor potential labor and environmental violations and embed a new labor attaché at our embassies to uphold compliance. And I’ll move the U.S. Trade Representative under my new Department of Economic Opportunity and create a new labor and environment enforcement division to enforce obligations and ensure that defending and creating American jobs are top priorities of our trade policy. My plan represents a new approach to trade — one that uses America’s leverage to boost American workers and raise the standard of living across the globe. The President has a lot of authority to remake trade policy herself. When I’m elected, I intend to use it.

““Thank you Las Vegas Spectrum readers for considering my position on trade policies. I realize this may not be something an LGBTQ reader would expect in the Spectrum, but remember, we’re all in this together and no matter your sexual orientation or gender identity, we’re all affected by an economy suffering from Trump’s trade war. Please consider my proposals for a new approach on trade.”

As We See It: Mail-in ballots, where Tucker Carlson got his...