Home Welcome and why we are progressive

Welcome and why we are progressive 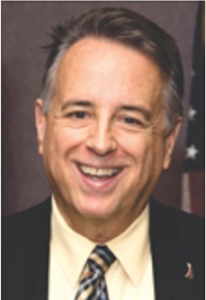 Welcome to the first issue of the Las Vegas Spectrum, the successor publication to the Las Vegas Night Beat, which in a ‘round about way, is the successor to the Las Vegas Bugle. I’m the former founder and publisher of the Bugle, which technically is now known as QLife and owned by our good friends Russ White and Garrett Pattiani. Confused? Bill Schafer, publisher of the former Night Beat, was my managing editor at the Bugle. When I sold the Bugle in 2002, Schafer started his own news magazine, the Night Beat. Sadly, Schafer suffered a stroke in early October and felt he needed to concentrate on getting back on his feet. As an advertiser, and occasional contributor to the Night Beat, I expressed an interest in forming a small group to buy the Night Beat. Bill accepted our offer and the December 2018 issue was the last Night Beat. In its place, we’ve developed the Las Vegas Spectrum. Farewell to the Night Beat. Bill Schafer will still be around. We thank him for his continued friendship, wish him well and hope for a speedy recovery. The Spectrum will be a LGBTQ news magazine with an admittedly progressive bent. While I am a gay man, I’m also a Nevadan and member of this human race. I’ve never been a single-issue person and hope you aren’t either. This column will discuss civil and human rights – rights which should be extended to all LGBTQ persons but also to everyone else, as well. Sodomy law repealed. In 1992, Jerry Cade, the first local doctor to tackle the AIDS crisis, decided it was time to repeal Nevada’s “Infamous Crimes Against Nature” statute, aka the sodomy law. Several community leaders met in the offices of the Las Vegas Bugle and started strategizing on how to pull off the first legislative repeal of this law that had been used against our community since the English common laws in 1533. Our efforts were usurped by then Sen. Lori Lipman Brown, who beat us to the punch. We jumped on board with Lori and were joined by dozens of activists. Many of those activists learned to lobby and many testified before the legislature for the first time in their lives. The sodomy law was repealed in 1993. Thanks Lori!Gun background check Gun ownership in Nevada, according to CBS News, is 37.5%. While that figure is probably skewed due to the numerous gun shows and sales to tourists, we are one of the deadliest states in the US for gun violence. We have 13.8 deaths per 100,000 in population or about 2 more deaths per 100,000 than die from motor vehicle accidents. Even a few days after the tragedy of Oct. 1, 2017 where 58 persons were massacred and over 500 persons were physically injured, Nevada hotels and convention centers were back in the gun show business. True, three shows were canceled and business at the remaining shows was slower than usual for a couple weeks. Soon it was back to normal, if you can call selling weapons for mass killing normal. Sadly, this is a national epidemic. At least Nevadans showed some humanity in electing State Sen. Aaron Ford as our new Attorney General. Ford has promised to find a way to enforce Nevada’s background checks on gun sales, a voter-passed initiative that our former AG, Adam Laxalt went out of his way to derail. Good riddance to Laxalt. This guy sued the feds to help end the Affordable Care Act and then refused to enter the state in another lawsuit, aimed at preventing the Trump administration from ending the Cost Sharing Reduction (CSR) payments, which were made to help insurance companies off set the cost of insurance premiums offered to lower income people. With the successful lawsuit in Texas, where a single judge has ordered the entire ACA unconstitutional, it’s time for Medicare for all. The Texas federal judge’s ruling will be appealed but in a twist of irony, it’s being appealed by states and not the Trump administration. This lawsuit, brought by Republican governors and attorneys general, was in stark contrast to the GOP election talking points that they wanted to protect pre-existing conditions and keep healthcare affordable. And yes, if you think only the Supreme Court Justices are important, you need to know that it was a Senate approved, federal judge who struck down the ACA. US District Judge Reed O’Connor, who wants 133 million Americans to lose their health care, is a former aide to Sen. John Cornyn, the GOP majority whip who led the unsuccessful ACA repeal efforts in Congress. Shame on the Democrats Shame on the Democrats. Judge Reed O’Connor, nominated to the US District Court by then President George W. Bush, was approved by a Democratic controlled majority in the US Senate. O’Connor has been a disaster for human rights. In 2016 he ruled against the Obama administration’s interpretation of Title IX rules. This case had to do with transgender students being allowed to use the bathroom corresponding to their gender identity. Also in 2016, O’Connor ruled against the ACA’s prohibition of sex discrimination in health insurance. In October of 2018, O’Connor ruled that the Indian Child Welfare Act was unconstitutional. Native American children were being taken by courts and adopted out to non-Native families, thus effectively erasing their heritage and customs. The latest ruling by O’Connor that the entire ACA is unconstitutional, rather than just a narrow portion, is the coup de grace that forces a minority-held, conservative and antithetical view of the law on to those who need our government’s protection the most. Rob Schlegel, Publisher

ABOUT US
Who we are Welcome to the area’s newest publication – a news magazine geared to the LGBTQ and progressive community. A publication where we blend the best of new ideas and good, solid news features.
Contact us: info@lasvegasspectrum.com
© Las Vegas Spectrum 2020